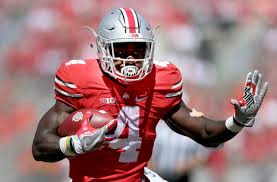 Jack-of-all-trades but master of none:

SUMMARY: Samuel declCurared for the draft after a strong junior campaign. The junior was successful is all aspects of the game racking up 1,636 all-purpose yards. Rushing for 771 yards of 97 attempts (8.0 ypc) and caught 74 passes for 865 yards. Finished the season with 15 total touchdowns (8 rushing, 7 receiving).

At the end of the day: Even though we aren’t sure how teams are going to use Samuel we know that the ball needs to be in his hands. He’s capable of scoring every time he touches the ball. Samuels cutting ability and vision makes him capable of exploding through holes resulting in chunks of yards.

I can see him coming out of the backfield being a mismatch nightmare running with linebackers. Line him up at WR his speed alone can beat a corner. Needs to find the right scheme to be successful in the NFL.