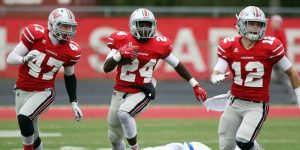 Robert Lewis has soft hands and is quick. He will make an opposing quarterback worried.

I was able to go around to elementary’s in the area and talk about safety and play games with them.

My Mother just because I have seen my mother go through the worst and not matter what it was she pushed through it and kept a smile on her face and never gave up.

I played Football,Basketball,Baseball, and I ran track

My ball hawking ability, My speed, The way I pursue the ball and my speed coming out of my breaks

The Different concepts they have with the down and distance and the way the receiver run certain routes and his release off the ball.

Losing my brother a month before my senior season kicked off. But I took it and used it as motivation, and now that every time I step on the field, I know that I’m stepping on it for him to.

I take a pre-game shower before every game and listen to the playlist that I made the night before and dance around in the locker room for a little bit and say a prayer to the man up stairs because if it wasn’t for him I would not be able to do the things that I’m able to do.

Keeping my eyes out of the backfield

Tell me where you need me to play and the job will get done!! 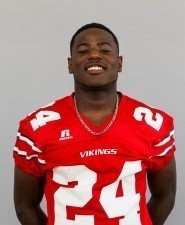 My Mama the house she been working her whole life to get.