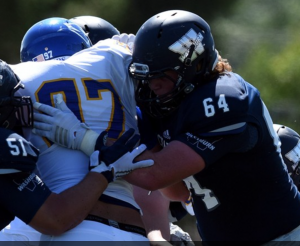 Michael Miller is a big boy for Washburn. He did a wonderful job protecting his quarterback

I would say the coolest thing off the field was being a part of the organization SAAC, which is currently working with make-a-wish to do a wish reveal for a young child named Cortez. As a group we put his name out their and raised enough money to be a part of this special moment with him.

Real Analysis I. This was the last mathematics course I took at Washburn.

My older brother Kyle; growing up he had one of the greatest work ethics I have ever seen. This led him to be a USAFA grad, and now he currently flies F-16’s in the United States Air Force.

I played basketball and baseball.

In high school I also played on the defensive line.

When breaking down film for myself after a game first I look at whether I got my assignment completed, then I look at the technique that was used, and finally if I finished the block or not. When breaking down opponents, I first will watch a few full games looking for specific tendencies in their gameplay as well as taking notes of the defensive schemes. While watching I look at which individuals catch my eye on the defense. Then I go through and watch specific individuals that I will face, and taking note of every possible move and technique that they use in games.

I believe this is a toss up between Collin Bevins from Northwest Missouri State University, and Si Doe Jr., from Fort Hays State University. They were two different types of players, where Bevins was very technique sound and very long, making him a great pass rusher and run stopper. Si Doe was one of the quickest Defensive Ends off the ball I ever faced. He was very explosive quick around the edge.

That’s a tough question, in college I played LT, so I used to like to compare myself to tackles in the NFL. But now trying to play interior, I think one of my favorite centers to watch is Alex Mack with the Atlanta Falcons. I would compare myself to him because he is athletic and finishes blocks.

The day of the spring game of my last spring ball at Washburn, my former running back and really good friend of mine Brandon Bourbon committed suicide. It was a pretty tough time in my life, I think the biggest thing with overcoming it was the support of family and friends, and as well as my church pastor calling and talking it over with me. I believe that being close with my teammates during that period of time really helped me and them get through it.

I believe my biggest strengths are my versatility and athleticism, allowing me to play multiple positions on the line. 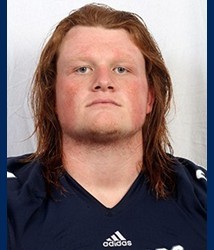 My biggest weakness is my arm length. My arms are a little shorter than most offensive linemen, causing me to lunge occasionally on pass protection.

I’ll do anything I’m asked to do, and I’ll always work hard.

Favorite player growing up was LaDanian Tomlinson, and the Chargers.

I don’t think I’ll buy a big item, rather go on a big hunting trip with my dad and my sister.