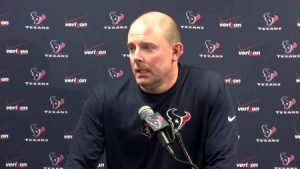 Godsey, 38, first entered the NFL with the Patriots in 2011, and had spent the past three seasons with the Texans, serving as offensive coordinator from 2015-16. After being let go by Houston earlier this year, Godsey was a candidate for the Jets’ OC vacancy, and was also linked to the University of Alabama.

Godsey played quarterback in college at Georgia Tech, where he holds several school records, and for one season in the Arena Football League before becoming a coach. He first coached at Central Florida and then the NFL’s New England Patriots before joining the Texans.