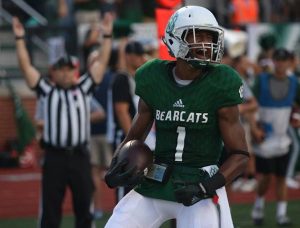 Volunteering at the veterans hospital and helping them out with anything that they need even if it’s just to talk.

My high school counselor/football coach Jeff Cross because he was the first male figure to become positively emotional about me. He let me into his home so I could finish out and graduate at my high school.

I’ll say it’s my effort because I will never give up on a play. You can see on film that I play from whistle to whistle regardless if I’m blocking or running the ball. I want to make a impact.

I would watch 14 – 16h of film a week. I watch every play in normal then slow motion to pick up tendencies and write down strengths and weaknesses (LOS, backpedal, feet, hips out of break, hands, eye discipline, and physicality). I always look if the CB a hustler or not.

Keenan Allen because even though he has that big frame he’s still quick/elusive.

At my JC, Diablo Valley, I wasn’t prepared for the responsibilities of life moving out there by myself. I adapted to sleeping on different couches and guest rooms, working two jobs, and the minor setback of a practice squad player because of out of state fees. I was knocked down but being able to stand back up on my feet and get back in the game to receive a full-ride scholarship to the best D2 school in the nation was one of the best accomplishments of my life. 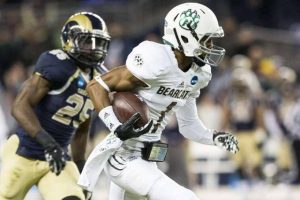 My ability to accelerate then stopping on a dime, also making the first man miss.

My emotions because I expect a lot. I’m really tough on myself about the little things.

If a GM gave me a second to sell myself I would let him know that I will work hard for the opportunity because that’s all I’m asking for, a opportunity. I’m not really a vocal person because I’ve always proved it with actions. You wouldn’t have to worry about me watching extra film or doing extra work after practice on the field because I know it’s my job but above that it’s the game growing up that I love.

Something I’ve always imagine of doing is helping my mother with money.