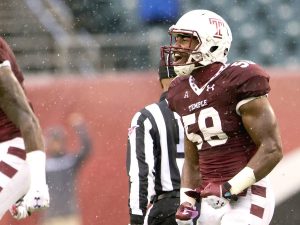 Haason Reddick of Temple is one of the fastest rising players in the 2017 NFL Draft.  Our friend Dylan Lloyd of Draft Engineers, broke down this Scouting Report on Reddick after watching some film.

While I only had the time to watch 3 of his games, I got a good feel for his play. When Reddick stood up on the edge he played very well. He could use his size, or lack of, to speed past offensive lineman. He was also able to move around the line and stop a runner or cover a receiver/tight end. When his hands were on the ground, he sometimes had trouble.

His lack of size helps him in the speed department but it hinders him in power. He sometimes had trouble breaking off of offensive lineman to get to the quarterback. This is probably why he is moving to outside linebacker. In the USF game, their quarterback repeatedly got out of pressure with his feet and made big plays with his arm. The good thing for Reddick is he won’t have to deal with many of those quarterbacks at the next level.