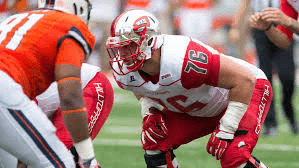 Athletic Ability: Lamp has elite athleticism for an offensive lineman.  He shows quick feet, and the speed to be able to pull to lead on outside runs.  He is quick & fluid where he can get to the 2nd level to take on a linebacker.  Lamp is a great knee bender, and can use hips well by sinking them & exploding through them to be able to block with leverage.  His athleticism allows him to be versatile in multiple positions on the offensive line.

Pass Blocking: When pass blocking, Lamp blocks with a good base that allows him to kick slide very well.  He shows that he can mirror a pass rusher & steer him away from the QB.  Lamp does show that he tends to struggle against pass rushers who have an explosive 1st step.  He gets his hands on a defender fast with okay hand placement, but needs to show that he can keep his hands inside on a regular basis.

Initial Quickness: Lamp’s quick feet allow him to have a quick 1st step off the snap, and set a good base to be able to block well.

Playing Strength: When Lamp gets his hands on a defender, he uses exceptional leverage & intensity to disrupt their assignment.  He can punch decently without losing much balance, and can keep them active while engaged with a defensive lineman.

Mobility: The way that Lamp can move throughout a play is amazing.  His athletic ability allows him to get to the 2nd level of the defense, and to be able to pull quickly.  He also shows that he can get outside not only to be a lead blocker on running plays, but also to help set up screen plays.  He does a good job of helping on double teams, and then coming off that block to engage an outside rusher. 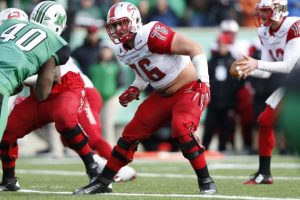 Strengths: Lamp’s athleticism, awareness, and intensity are reasons why he is considered as one of the top rated offensive linemen in this year’s draft class.  He is versatile that he could line up & play as a tackle or as a guard.  He can run block with good strength, and get outside to lead block, pull, or cut block a defender.  His ability to get to the 2nd level is outstanding.  In pass protection, he blocks with a good base, and can kick slide well with a combination of active hands to mirror & steer a pass rusher.  His leverage & punch can disrupt most defensive linemen

Weaknesses: While Lamp is exceptional in pass protecting, he can struggle against pass rushers who can explode out of their 1st step.  On running plays, he does not show much strength when blocking a defensive lineman straight ahead.  When dealing with blitzes, he does not pick up the additional or delayed blitzer right away.

Summary: Forrest Lamp was a four-year starter for the Western Kentucky Hilltoppers.  On film, he shows the skills where a team could look for him to line up as either a tackle or guard.  The team that drafts him will be getting an offensive lineman who is athletic, smart, and plays with intensity.  He has quick feet, can bend well at the knees, and has the strength to steer a defensive lineman inside, outside, down the LOS, and away from the QB.  His quick first step allows him to get his hands on a defender quickly to use leverage, and to be able to get to the 2nd level.  Lamp will need to work on getting stronger to be able to drive a defensive lineman straight back on inside runs, along with being aware of extra blitzers in pass protection.  As combines & pro days draw near, I see Lamp as a potential early 2nd round pick as an offensive guard.  He has the potential to be a long-time contributor for any offense in the NFL.