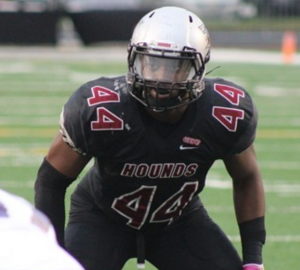 I played LB in college but I’m switching to Safety for the next level.

I played college ball at the University of Indianapolis. Where we won 4 conference championships haha had to throw that in there.

The coolest thing that I was able to do off the field was becoming a flag football referee. The energy and excitement that the kids came with every week was amazing. It was good to see the kids enjoying the game the same way I did when I was a kid.

I would have to say Finance, I stayed in the library every night for that class.

I’m from a south suburb in Chicago, IL called South Holland. I did most of my sporting activities there except for football. I played football in Dolton for the Dolton Bears. S/O to everyone who was about of the Dolton Bears. Great support systems within both communities.

My role model will forever be my pops. He’s a guy who has a no nonsense policy for excuses and he shows that through his everyday life. He’s a hard working guy who provides for his family and will make sacrifices to do so. Not sure where my family would be without him. He’s also one of the smartest people I know. The guy knows just about everything. One day I hope to be half the man he is.

I played just about every sport growing up. I played basketball, ran track, wrestled, and played baseball.

Surprisingly I played every position on the football field before besides QB.

At LB my downfall was always my size and that wasn’t a down fall it was just something that always got me overlooked. But my speed and ability to come down hill at the LB position is what separated me from other Linebackers. Now that I’m switching to Safety size isn’t a factor anymore and I’m excited to see what I can do at the position.

When I watch film I try to watch tendencies of other players. So for example if a lineman is coming up and blocking a certain way on film. When I face him more than likely he’s going to block the same way and when that moment comes I already know how I’m going to attack him. Same with a RB. 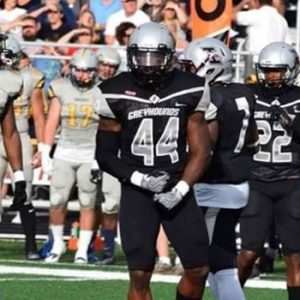 That’s tough, I’ve been fortunate to play against some great players and athletes. I don’t think I can narrow it down to just one

I would compare my game to Deion Jones from the Atlanta Falcons. He’s a guy who is quick and able to stop the run but he can also cover your RB in the open field. He’s a scrapper who plays big on the field.

I’ve faced a few obstacles in my life time, but the biggest would have to be me dealing with being placed on the B team my freshman year of High School. That honestly is when everything started. So a quick story, I attended Mount Carmel HS, a power house in Chicago that is known for academics and football. On the Freshman level they have an A team and a B team. The A team is full of players who the coaches think are the best. The B team was for guys who they didn’t think was good enough to play on a certain level of competition.  As a freshman I was placed on the B team and that’I was frustrating because I knew I could. To cut the long story short I worked hard every summer and after freshman year both teams combine. After my freshman I started every game until I Graduated.

Not too much honestly. I like to stretch, get a good pump in and listen to music.

I would have to say my biggest strength would be determination. If there is something that I want I put my mind towards it and I’m going to get it done.

My biggest weakness would be being impatient and I feel as if me being determined has a lot to do with that. But I’m learning everyday that patience is key and things come when God wants you to have them.

I would tell them to pay attention to how the game is changing. Yes size will always be wanted but In today’s game it’s about being able to move and being able to cover. I’m capable of moving well and my play style is aggressive. I am a player who understand that nothing is giving because I’ve experienced being at the bottom and being overlooked my whole life. So if I do get this opportunity, I’m going to give my all. I’m not content with just signing with a team, I want that gold jacket but I understand that it takes time and a lot of hard work.

Favorite player right now is Von Miller, he’s a beast. Before Von it was Ray Lewis. My favorite team is the Chicago Bears.

This is a good question!? I would have to go with Kobe Bryant first that’s my favorite basketball player, Tupac because the guy was a genius and had such a huge impact on the world at such a young age, and last would be Ray Lewis. All of these guys were great at what they did and I would pick their brain apart about all aspects of life. Not gonna lie, It was hard narrowing it down to only three.

Can’t name a certain item as of now but My first big item will be something for my parents.