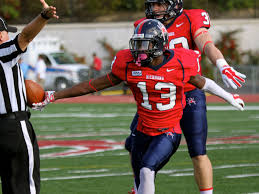 In high school I recorded over 400+ hours volunteering at an after school program with elementary and middle school students. Also, I fed the homeless with a few of my college teammates at a local church in Richmond.

My Capstone class for Sociology was by far the hardest class simply because we had to remember everything we learned from our lower level sociology classes throughout our four years and bring them all together.

Eric Berry because he battled with cancer and worked his butt off to get back on the field. When faced with a life or death situation, he responded in a way that many people would or could not. As a man of God, he trusted in the Lord and was able to make one of the best comebacks in sports history. Upmost respect for him and his family.

I played quarterback all my life. In high school I was announced as the starting QB my sophomore year. Junior year I remained at quarterback and led my team to the playoffs both years. My senior year, my coach allowed me to play both sides of the both. I rarely played QB. I mostly played running back, wide receiver, cornerback (sometimes), safety, punt returner and kick returner.

As a safety, I think my range and ability to play both the run and pass sets me apart. I’ve been blessed to display a sense of versatility, filling fast on runs/ making tackles and making plays on the ball in the air.

Tendencies, patterns, style of play, weaknesses/strengths, routes, pass sets, a little bit of everything. Also, I envision myself on the field playing the current play and what I would do to defend it.

Antonio Cromartie, we are the same size, long, fast, and versatile. He could play corner or safety. I believe I could do the same if I put in the work to play both positions.

Breaking my arm twice was definitely rough for me. The first time wasn’t as bad as the second. Physically, the first break was bad in a sense that I literally broke both bones in my arm and had major surgery. However, it happened at the end of the season and I had all off season to recover. The second time I fractured my arm underneath the plate that was surgically placed there. It was a little crack in my forearm that kept me out for the rest of the season as I only played 5 games.Not finishing the season was rough after coming back strong and playing well the first 5 games. In order to overcome this, I did everything I could to cheer on my team at practice, in the film room, and at the games.

No matter who I play or what level I play on, I always puke before the game to get the nerves out. I can never control it. It just happens. And of course, I pray before every game. Not only to myself, but with my dad over the phone before arriving to the game, and with a few of my teammates. Even after my injury.

I need to tighten up my man coverage

I’m the type of guy that will come in everyday ready to work. I’m the same person everyday and I keep my nose clean. Definitely the friendly type and I get along well with people. I am not selfish and will play any position you need me to play. I put my team first and will do whatever it takes to win.

My favorite player was Michael Vick because I wanted to play like him growing up as I played quarterback. My favorite team was and still is the Tampa Bay Bucs simply because they are my home team.

Anything that will help with recovery or preventative for injuries (norma tech boots, Cryo, hot/cold tub). I took some words of advice from a few veterans who suggested to take care of your body once you first get into the league. After a few years, once you are settled in with a secure job, then buy a car, house, jewelry, etc.