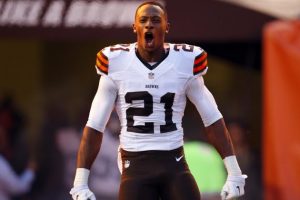 Justin Gilbert was the eighth pick in the 2014 NFL Draft. Many thought he was the best cornerback in the draft, but he has been horrible since entering the NFL.  He was traded to the Steelers who released him today.

Today after his release Aditi Kinkhabwala said WOW, because Gilbert was released.  Joe Thomas quickly responded taking a shot at Gilbert for his hunger in the game.

If you don’t like football, it doesn’t matter how talented you are, your star will burn out quick. https://t.co/r7PfDSTljL