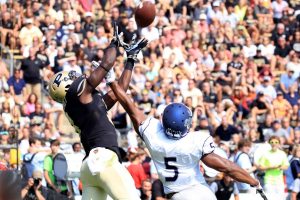 Bilal Marshall is super underrated and can do a lot on the football field. I love this kids skills

I was fortunate enough to go to South Africa last spring break in order to help out at a Christian orphanage with a couple of my teammates. We were there for a week where we built a new fence around the property to keep wild animals and criminals off of the premises. We also built a doggy pen for the guard dogs to sleep. The last thing we did was repaint the walls of the orphanage.

Biology 203 which is Human Anatomy.

My mother, reason being is because she had me while she was in college and continued to finish her degree even though she had to raise me. Her persistence allowed me to be able to live a where I had everything I needed.

Track and Field as well as basketball.

Played Quarterback my entire life until after my freshman year at Purdue where I switched over to Receiver.

Being a former Quarterback, I know the entire offense in and out and I read coverages fast as if I was in the backfield. My biggest asset is my long arms where I can High Point balls over corners as well as making the diving catch. 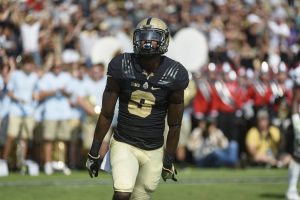 I look at both how the corners and safeties play in a particular coverage. Most defenses have a string attached to each player so it’s easy to find out what the corner is going to do based off of what the safety is doing with his depth and width on the field. I also look to see how aggressive a corner is and what hand he likes to use in the press game or if he uses both.

Soujourn Shelton from Wisconsin, he was quick and instinctive.

I would say A.J Green, we have a similar body build. We both have long arms and quick off the line.

Not playing at all my Redshirt Sophomore Year. The following spring I worked like I never have before thus becoming the player that I became by my senior year.

I say a quick prayer right after the Nation Anthem just to thank God for giving me the opportunity to play this game.

Being a former quarterback and being able to be more mentally prepared than my opponent. I also can play any position on the field Outside Receiver, Slot Receiver, Running back, etc.

With me you will get a player that’s going to do everything the right way. I compete through the whistle and never give up on a play.

Michael Vick, he revolutionized the game in his own way.

Mike Epps, Kevin Hart, and Ice Cube. That might be the funniest dinner table you can possibly be around.

When I can afford it, I plan to move my grandparents to a new house in a better area.