49ers fans are you happy about your new head coach after last night’s game? 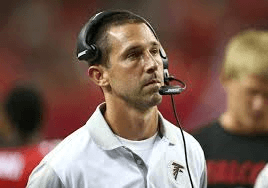 In the fourth quarter all the Falcons had to do is pick up one yard on the ground.  Instead of running the ball the 49ers new head coach Kyle Shanahan tried to throw the ball when he was hit and fumbled giving the ball back to the Patriots.

Then on their next drive, Matt Ryan suffered another sack from the Patriots’ 23-yard line (easy field goal range) pushed them into a third-and-23, from whence a holding call pushed them out of a chance for potentially game-clinching points.

Shanahan answered the question after the game, but I want to know what you think of you new coach?

“The thought is to get as many yards as you can,” Shanahan said, via Vaughn McClure of ESPN.com. “And we were right there on the fringe. It was by no means an easy field goal. From what I remember, we ran in on first-and-10 and lost yards. Got into second-and-11, so we try to get a pass to get us back into a manageable third down, closer to the field goal, and we took a sack. Taking a sack . . . got us into a third-and-20, so we threw a quick pass trying to get back into field goal range, which we did. But there was a holding call on the play. And when you get a holding call on third-and-20, it goes back that far. We were way out of field goal range. We tried our best to get back in but couldn’t get it done.”

“It’s not really the run-pass ratio that I look at,” Shanahan said. “It’s you stay on the field, and you run your offense. When went three-and-out two times, which was huge. I think we had second-and-1 on both of those. To not convert on second-and-1 and then third, it was tough. That’s why we let them get back into the game.”

The Falcons were not playing to win, they seemed to go away from what was really working. Devonta Freeman was dominating, but they stopped giving him the rock when they needed him the most.  I want to know what 49ers fans think?