2017 NFL Draft – First step to a Dynasty in Cleveland?

The Cleveland Browns have been the laughing stock of the NFL since 1999. The Browns have screwed up draft after draft since they were brought back after they moved to Baltimore. If the Browns can use their picks in this draft right, they can create a dynasty for the next ten years.

The 2015 draft for the Browns was a bit of a disappointment. First round pick Corey Coleman started well, but went off track after a hand injury. Second round pick Emmanuel Ogbah was actually really good. Ogbah had 5.5 sacks along with 53 tackles. Third round pick Cody Kessler, given he develops and isn’t constantly getting sacked, could be the franchise guy for the Browns. If Kessler, Ogbah and Coleman develop that draft will look better.

One of best decisions the Browns made last year was trading back with the Eagles. This got them what could be their franchise receiver for the next decade and the twelfth pick in this year’s draft. The Browns’ 1-15 record also landed them the first overall pick and what should be the easiest decision in this draft.

With the first overall pick in the draft the Browns must take Myles Garrett. Don’t take one of the crappy quarterbacks, don’t trade back, just take Garrett. He is the top player in this class and their is nothing reasonable that matches his value. The only way I would give up this pick is if I get offered multiple first and second round picks including 2 in the top 10 of this draft. The only team that might be possible for is the Titans, but I don’t think they will try.

There are more options for the second pick. I have the Browns taking Jalen “Teez” Tabor with the pick in my mock. Tabor is my top rated corner and if taken should take over Joe Haden’s spot as the number 1. 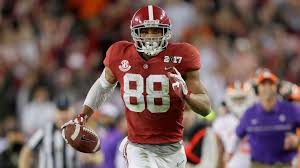 Imagine Browns getting OJ Howard and Myles Garrett? Then getting a QB in 2018?

The option popping up more and more is O.J. Howard. The Browns spent time coaching Howard at the Senior Bowl and he showed he was the best player there. I really like this option for the Browns. They can’t focus too heavily on one side of the ball and the corner class is so deep they don’t need to take one at 12.

The last option is trading back to the late teens or early 20’s. It could gain them a couple more picks in a pretty deep class. The more talent this team gets the better.

The Browns have 2 picks in the second round if they don’t take a corner in the first they need to select one with their first pick. The choice for me would be Tre’Davious White. He will double as the Browns nickel corner and the return specialist. Their second pick could be used on a safety like Obi Melifonwu, Eddie Jackson, or Justin Evans.

I think the Browns only need help at center. They need to make a push for Pat Elflein. Whether a trade up or with or their third round pick. After the first 3 round we are looking at a draft looking like this:

These three rounds look absolutely amazing. If the Browns get these players they will have the foundation for a great team. If the Browns don’t overthink this draft they will be in a good position for the future.