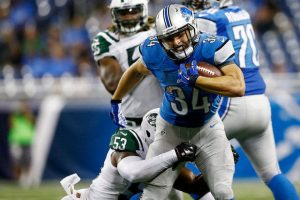 Lions have a steal in Zach Zenner

Michael Bennett did his research on former South Dakota running back Zach Zenner.  He was really impressed with the small schooler so much he called him the best white running back in the league.

“I think the running back, man, he’s — there’s not many white running backs in the NFL but he has to be the best right now,” Bennett said of Zenner Tuesday. “He’s doing such a great job of cutbacks and hitting the hole. He’s a really good back. I know all the stuff he did in college, three straight seasons of 2,000 yards. I don’t care where you’re at, if you can do that you have got amazing talent. And I think he’s just an amazing running back, the things he can do with the ball. He got good balance, he can spin, he can catch it out of the backfield. I think he fits the offense perfectly.”

Zenner, who has led the Lions in rushing the past two weeks, responded to the comments and said he believes it is a compliment.

“Everyone’s entitled to their opinion and it sounded like he said some pretty nice stuff,” Zenner said via the Detroit Free Press. “So I’m appreciative of that and I think he’s a really good player and we’ve got to be ready to face him. He does some stuff that you just kind of say wow when you look at the tape.”