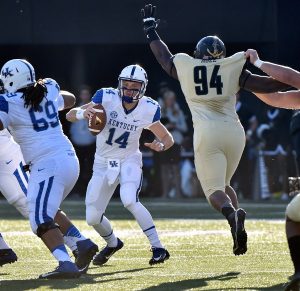 Torey Agee is a big man who has a knack for getting to the quarterback.

I got an opportunity to build a playground for a none profit organization in Nashville called The Next Door. It was at a women’s addiction treatment center. Their lowest level of care is a program called the FRC. The women get a chance to be reunited and live with their children as well as work. We built the playground with just volunteers and it is great.

Quantitative Methods was probably the hardest class I took just because I have never really been a math person.

My dad is my role model. He is not only a great example of what a father, a man, a husband, a Christian, and a football player should be like. I have learned so much from him over the years and I would not have made it this far without his guidance.

I played soccer up until middle school. That is when I made the switch to football.

I have played in both a 4-3 and 3-4 schemes under great defensive coaches. I am smart. I feel like I pick things up fast and I am very coachable.

I mainly look for tendencies. When the offense gets into certain downs or situations, what plays do they run? What are their top plays. How do they block those plays. More position specific, what are the weaknesses up front on the line? How do they block? Do they quick set, does one of them tend to lunge. Do their stances indicate run or pass? I try to pick up anything that can help give me an edge over the man across from me.

It’s a toss up between Germain Ifedi or Todd Gurley.

I’d say Aaron Donald. Like him, I’m not the biggest defensive lineman, but we both play hard every time we step on the field. It doesn’t mater who lines up on the other side of the ball.

Believing in myself was probably the biggest challenge I’ve had to face. I would stress over making mistakes. Football is an imperfect game played by imperfect people. It wasn’t until I let everything go that it changed, and my play on the field improved.

I say a prayer.

I am a hard worker.

My pad level gets higher than I’d like some times. 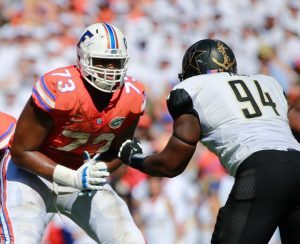 I might not be the most talented of prospects when you ask all of these draft gurus, but I work hard and I love the game. I’ve got the tools to play at the next level. All I need is a chance to show you what I can do.

My favorite team was the Dallas Cowboys. My dad was blessed enough to be apart of two of their Superbowl victories in the 90s. I grew up watching them.

I would like to have diner with my grandfathers from both of my parents side because they passed either before I was born or before I was old enough to really know them. The third person would Barack Obama. Meeting him would be such an honor.

I’d want to purchase a nice apartment. That is main thing that I’d be worried about. I have never really been materialistic so a lot of the clothes, cars, etc, could wait.