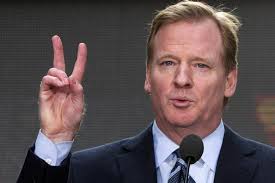 Goodell could have to give Brady the Lombardi Trophy….

Imagine if Tom Brady wins the Super Bowl? That may be one of the most awkward moments in pro football.  Tom Brady was suspended earlier this year for four games, after a long battle with Roger Goodell and the NFL.  Since being suspended Brady has been dominating the NFL and honestly has been playing like an MVP.  Well if Brady and the Patriots win the Super Bowl, Goodell may have to hand good ole Tommy Boy the Lombardi Trophy.

Today Colin Cowherd asked the Commish about handing the trophy to Brady, and his response was interesting.

Roger Goodell on the possibility of handing the Lombardi Trophy to Tom Brady. pic.twitter.com/4AnqSJHvaq