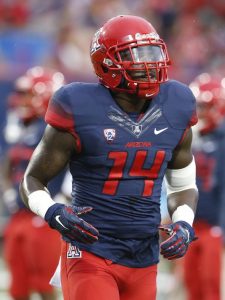 Paul Magloire is my favorite linebacker in the draft. He is so versatile and that interests me

I’ve done a lot of pretty cool things to give back to the community, but one of the coolest things that I’ve done was go to the Diamonds Children’s Hospital of Tucson Arizona. While doing routinely weekly visits I ended up creating a bond with a certain group of kids that were in there long term. So one of the weeks that I ended up going  I made them journals by hand decorated them to their liking. The look on their faces when they received them was priceless and it was something I will never forget.

At the University of Arizona I majored in healthcare management . Most of the classes that I took were fairly hard but I fell in love with the process of learning more and more about the major I was in. So to answer that question directly, all the classes I took  had difficulty to them  but I am ended up enjoying the process

I am from Fort Lauderdale Florida

My role model would be my son although he is only seven months old. I  learn so much from him on a daily basis.  Having him around has made me so much of a better person and he is constantly making me become a better man little does he know it.

The main thing that separates me from others at the position of (OLB) is that I’m very athletic, and I’ve played several positions besides linebacker. My coverage skills are on point, and the fact that I have played this position for a short period of time should intrigue scouts. I will continue to grow.

Tendencies for the most part. After I finish looking at tendencies of players that I will be playing against I then look at play frequency. What plays are being ran out of what formations? This gives you an idea during the game when you could see certain sets.

Coming from the PAC 12 week in and week out you are playing against some of the best players so this is definitely a tough question but I would say Christian McCaffrey this season during that game I posted 8 tackles 2 TFLS and a sack.

Going from division one to junior college and earning a scholarship right back to a bigger division one school it was definitely the biggest obstacle. I overcame it with perseverance prayer and hard work 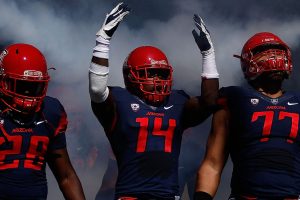 I am a player who is a hard worker and truly loves the game of football. To your team I’ll bring athleticism speed and strength at my position. I am a player who could play multiple positions, and also would be a gem on special teams. Without a doubt I am a player you would love to have on your team

Dan Marino and the Miami Dolphins

A house for my family.