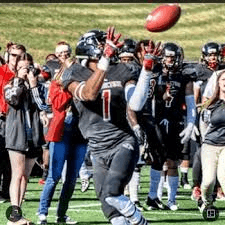 David Claypool is a playmaker for Benedictine.

Athletic Ability: Claypool is a good athlete with good speed. He’s a player who can change gears in open space.  He can separate from a defender on double move routes.  With his NFL type height, he shows that he has decent body control.

Hands: Claypool has decent hands, but tends to catch the ball with his body more often than with his hands. He shows the ability to adjust to a ball that’s either high or low, and make catches against any coverage.  He seems to be the most dangerous in the open field after the ball is in his hands.  He’ll need to show that he can attack the ball when it’s in the air instead of waiting on it.

Route Running: Claypool’s route running skills are raw. He can run the entire route tree, but he isn’t quick or sharp when coming out of his breaks.  He is a big play threat on any route that can get him separation & into space after pulling off a double move, like an out & up, or skinny post.  Against zone coverage, he can find spaces & sit down in them, and he can spilt defenders on deep routes.

Run After Catch: Claypool has the skills & potential to turn short plays into long plays due to his speed & athleticism. He won’t go down easily after first contact, and he will fight for extra yards.

Release: Claypool shows that he has a decent release when getting off the line of scrimmage. On film, defenders didn’t press him at the line, so his ability to beat the press is a question.

Toughness: Claypool shows toughness when running across the middle for passes, and when fighting for extra yards. He isn’t afraid of taking contact if it means getting into open space.

Return Ability: Claypool shows that he is versatile to be used on both kick & punt returns. He shows the ability to follow his blockers, but needs to work on his vision.  On punt return, his decision making on whether or not to field a ball or to let it bounce will need improvement.  With time & reps I think he can show that.

Strengths: Claypool is a player who plays the game with speed, acceleration and quickness when his hands are on the ball in the open field. He shows the ability to line up outside, and in the slot.   His hands are decent, and has the ability to fight for more yards after the catch.  He has the nose & focus to get into open space by any means necessary, whether it’s with his speed, or using a double move.  He has the height & body frame that can add more weight if needed.  Whether it’s on offense or special teams, he will not go down or stop easily.

Weaknesses: Claypool does have pro level size as a receiver, he still needs some polishing. His route running is raw, and will needs to be more quick & sharp out of his breaks.  He will need to show that he can be affective against press coverage as defenders seemed to give him a cushion more times than not on film.  Like most pro prospects at the lower levels, like the NAIA his level of competition that he played with, and against will be studied closely.

Summary: Stats don’t show the skillset that David Claypool played with for the Benedictine College Ravens. He ended his final season in 2016 with 14 receptions, 275 total receiving yards, and 3 touchdowns.  As a returner, he ended 2016 with a team leading 347 kick return yards, and a team leading 217 punt return yards.  Claypool looks like he could best be used as a slot receiver at the next level.  He has good size, good speed & quickness, and shows that he can be dangerous in open space.  Double move routes are where he looks to be the most effective.  He shows the toughness to go across the middle, and to take on defenders at first contact.  He has decent hands to haul in most passes, but tends to bring them in with his hands most of the time.  His breaks & cuts will need to improve, along with his ability to attack the ball while it’s in the air.  As a return man, he follows his blocks despite not always having the best vision, or decision making skills.  He has the height & frame of a pro receiver, but will need to show that he can be productive at a higher level after playing at the NAIA level.  Right now, I see Claypool as a player that has could be brought onto a team as a returner while his skills as a receiver are worked on.  An NFL team or CFL would consider bringing him on as a UDFA for minicamp and/or training camp.