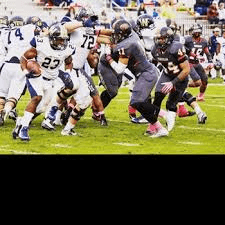 Brandyn Bartlett of Tusculum is a game changer. He will punch you in your mouth if you run at him

Athletic Ability: Bartlett is an excellent athlete with good speed for an outside linebacker.  His balance & explosive first step allow him to move well in coverage, as well as close in fast when blitzing.  Has the frame for a pro sized outside linebacker.

Against the Run: Bartlett is very physical when taking on linemen, but must show that he can be just as physical against much bigger linemen, and with a lower pad level.  He can move & slip through blockers to get to the ball, as well as disengage a blocker quickly.  On outside runs, he can move well laterally with pretty good range.  He takes decent angles towards the ball carrier, and is a good example of not giving up on a play by chasing down a RB from behind.

Tackling: Bartlett is a violent, wrap-up tackler who looks to cause fumbles whenever possible.

Instincts: He has good instincts, and shows discipline against the run & pass.  He can diagnose a play pretty quickly while in coverage.  Despite playing with good speed, and being in a good position more times than not, he’ll need to work on closing in on a ball carrier faster.

Pass Rush Ability: On film, Bartlett shows that he can close in on a QB at a fast rate.  He’s quick enough to beat a RB & an undersized lineman in pass protection, but needs to show that he can do the same against larger linemen.

Pass Coverage: Bartlett shines in this area.  His speed allows him to stick with a RB or TE, but tends to give up too much of a cushion at times.  He gives away size to a TE, but makes up for it with his athleticism.  When playing zone, he sticks to his coverage well with good awareness, but needs to show that he can close quicker.

Strengths: He’s an athletic outside linebacker with good speed, balance, range and explosiveness.  Bartlett has a violent mentality when tackling, and can cause a fumble at any time.  With good instincts, he shows that he’s very disciplined against the run and the pass.  He can diagnose a play pretty quick, and can close in on a QB at a fast rate when blitzing.  He can disengage a blocker, and get to the ball carrier well, including the will to chase him down from behind.  In pass coverage, Bartlett can stick to his guy when playing man, and can stick to his responsibility with good awareness when playing zone.  He has the frame of a pro level outside linebacker.

Weaknesses: He tends to take on blockers with a high pad level.  His ability to beat larger lineman in pass protection is a question.  Despite having good instincts & play speed, he doesn’t close in on the ball quickly while in pass coverage, and against the run.  Level of competition will be looked at extensively.

Summary: Bartlett has had many stops along his college.  After redshirting at Mississippi State University, he transferred to North Dakota State College of Science in 2013 where he racked up 80 tackles 1 INT, 8 TFLs, and 1 FF in 10 games.  After that, he transferred to Tusculum College where he was a three year starter for the Pioneers.  Bartlett finished his career at Tusculum with 229 tackles, 7 sacks, 6 FF, 1 INT, and 12 TFLs to go along with being a thee time all-conference selection.  He typically lines up on the outside in a 4-3 defense, but shows on film that he can line up on the inside as well.  Bartlett can play the outside linebacker position with good speed, range, explosiveness, and balance.  He can get off blocks, get to the ball at decent pursuit angles, and wrap up a ball carrier violent while looking to cause a fumble.  Bartlett can blitz the QB very quickly, and can beat undersized linemen & running backs in pass protection to get there.  Man coverage is not an issue against RBs & TEs thanks to his athletic ability.  He will take on any contact despite playing with a high pad level at times, and will need to show that he can beat larger linemen as well.  When getting to the ball in run pursuit, or in pass coverage, he needs to show that he can anticipate quicker, and close in quicker.  At the pro level, Bartlett’s best fit looks to be as a SAM outside linebacker in a 4-3 defense.  From his stats, he shows that he can be productive.  The question is can he keep the same level of production in the pros as he did at the Division II level?  Right now, I see Bartlett being an UDFA that can earn an invite to an NFL or CFL team for minicamp or training camp.