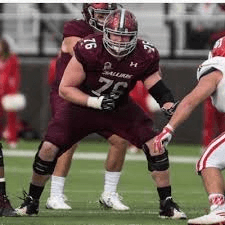 Reid Sealby of SIU is a big boy with great footwork

While I was a player at the University of Iowa (2012-2015) George Kittle (TE) and I had the opportunity to take a homeless man out to lunch and buy him a hat and gloves for winter. He was very thankful and it was a really gratifying experience.

My Dad. He played for the New England Patriots in the 80’s after wrestling in college at Mizzou. That accomplishment speaks for itself about how hard of a worker he is. I learned my work ethic from him.

I dabbled in several other sports but wrestling was my primary sport other than football. I was the 1A HWT State Champ my senior year in high school.

I’ve practiced long snapping extensively for punts and PAT’s. I never had to do it in a game but it’s still a skill i’m confident in doing. I was also on our punt shield, PAT/FG unit, and our kickoff return team this past year.

I would say my conditioning. I pride myself in being able to go as hard in the 4th quarter as I can in the first. That or my knowledge of the game and ability to interpret defensive schemes.

For three years while I was at Iowa I went head to head with Jaleel Johnson (DT) almost every day. He’s a big guy who moves well and is extremely physical. Karter Schult, DE from UNI is a great player too, he was a handful when I was at SIU and we played UNI in 2015 and 2016.

I would like to say either Joe Thuney of the New England Patriots or Maurkice Pouncey of the Pittsburgh Steelers. Both those guys are animals and are fun to watch.

Transferring from Iowa to Southern Illinois was a big leap of faith for me. I was only long snapping my last semester at Iowa and arrived at SIU at 250lbs and told I’d be an O lineman, with no guarantee of playing. By the time I left I was 295, had started at OG for two years, and was voted as a team captain by my teammates.

I have one of my teammates tape my wrists for me, and I have handshakes I do pre-game with 4 or 5 guys on the team. 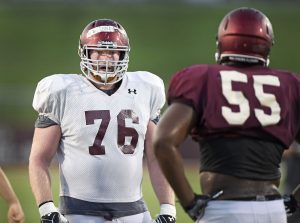 1 on 1 pass pro with speed rushers.

I’m going to give you my best effort every single day and do whatever the team asks of me. I’ll make my teammates better every chance I can get.

A new truck for my Dad or a beach house for my Mom.