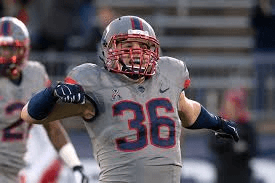 Matt Walsh has heart. He reminds me of Zach Thomas. He is a playmaker on defense.

Teaching and training kids in middle and high school. In my town very few kids have every played division one football, so I try to help that number. During my spring/May break I would go to my high schools spring practices and help coach the linebackers. I love working with kids who have potential. By finding a kids strengths and weaknesses, I can use my high level of knowledge in football and physical training to help kids reach their potential.

My father is my role model because he grew up in a very unstable household with little to no support throughout his entire life. He became very independent at a young age working hard for everything he had. What really made him my role model was the fact that his life goal was to provide a better life for his kids than what he had growing up. He has succeeded in that task for sure. I have taken that idea and would also like to better the quality of living for the next generation of my family.

I started fullback my true freshman year and played there my first two college years until I was moved to inside linebacker the spring leading into my junior year. Linebacker was my primary position in high school as well.

My relentless physicality paired with my ability to be a defensive coordinator on the field posed me as the leader of our defense almost immediately. When I was moved to the defensive side of the ball, I was able to adapt and understand the schemes right away. This allowed me to be the signal caller and get the defense aligned and ready to do their job on the snap.

As players we were provided scouting reports that listed the players strengths and weaknesses as well as offenses tendencies by formation, personnel, down and distance, and field zone. I would watch film with that information and try to find areas to expose these weaknesses in certain situations. For example, if I knew a team would be running some sort of outside zone variation to my side when it was 3rd & 3, I would slant my interior lineman the direction the ball was going to help harden the edge which would allow us linebackers to flow downhill easier.

Without a question it would be Paul Posluszny. Its not his athletic ability or freakish speed that makes him great, it is his passion and aggression for the game. I feel that there is only a few true hard-nosed old school linebackers left in the league, and he is definitively one of them.

I would have to say all of the different ups and downs throughout my college career. I had three head coaches throughout my four years at UCONN. When I came in as a true freshman and played fullback, it was all that I could have imagined. Once coaching changes began, the position was wiped out of the offense. I was left with no position on a team that wasn’t succeeding. I wasn’t sure if I was going to continue my career here. After meeting with Coach Diaco, my head coach, several times, he wanted me to give linebacker a shot. From that point on everything was different. I felt like I was working for so much more. As my senior year approached, I was voted a team captain. As the season went on and the wins weren’t coming our way, the hardest part was keeping the team in tact. There were so many people unstable about the situation and just fighting every day to keep everyone positive and believing was a very tough task.

Not exactly pregame rituals, but before a series began, my buddy Jalen and I would head butt each other five times to make sure the bloods pumping.

I would say my ability to stop the run, which is what our UCONN coaches emphasized all the time as our first job. With the consistent coaching in the run game blended with my instinctual physical play, a team will not run the ball on me.

My biggest weakness, which has improved a lot over the past year, is zone coverage. I have always been very good when it comes to man to man, but being able to zone off and break on the short arm separation is what I need to work on. 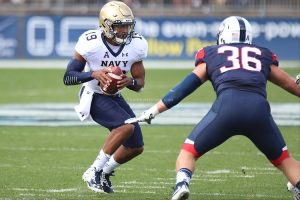 I want to be a part of something and surrounded by people who want to win, better themselves, and ultimately want to be great. I’m the guy that helps everyone get there. My passion for the game, dedication of being a student of the game, and sacrifices off the field become contagious to everyone around me. Ask any one of my former teammates or coaches about what kind of man I am. Some guys may get upset once in a while when I hold them accountable or tell them what needs to be heard, but in the long run they know everything I do has the right intentions. I have been a captain on my high school and college football teams for a reason. Give me the opportunity and I will buy in to what your mission is, instill it in others, and then take it to a new level. I appreciate your time; I wish you and the rest of your organization the best of luck.

My favorite player was always Ray Lewis. I felt that I was able to relate to his style of play on the field and in the locker room. His passion and vocal leadership was amazing to watch. My favorite NFL team is the Giants. My dad grew up very close to New York so I adapted that liking from him.

Ray Lewis, my great grandmother, and Warren Buffet. All great mentors of life and success.

I would have to say I would pay for the rest of my little brothers’ college tuition. My parents have provided so much for us three our whole lives and to be able to take a little less weight off their shoulders would be a great feeling.