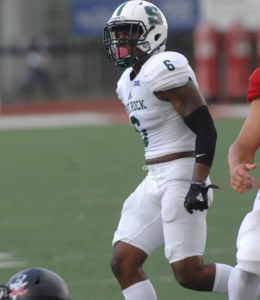 Slippery Rock DB Kevin Green is fun to watch. He is physical and has a nose for the ball

Playing in the Erie Elite’s annual Turkey Bowl every thanksgiving morning to raise money for the Erie City Mission around the holiday season.

My mother is my role model for many reasons. Main reason being her positive outlook and handling of life issues that she was able to instill in me to help me handle my growing pains better.

I grew up a offensive player playing running back and returning kicks.

As a safety I take pride in man coverage on slots and winning that battle against faster guys having all that space to work with. Also, the way I was built at my school to pursuit to the football is a big factor that separates me from other Defensive backs.

Different down and distance concepts, reciever releases on pass plays vs run plays, and QB release on deep, quick and intermediate throws.

Cyrus Jones, he is a smaller guy but has great football IQ and the feet to stick with anybody he lines up against.

Missing a year of football due to academics. During that year I realized I wouldnt have the game forever and that i had to make sure all my ends were tied up in every aspect of my life and i used the motivation of playing with my guys again to get me back on the field. 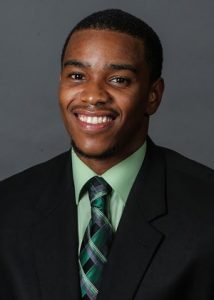 Head straight to the staduim after pre-game meal and get in the whirl pool while listening to music before I suit up.

Sometimes not being patient enough. Being too fast instead of staying patient.

Tell me where you need me to play and I will get the job done by any means.

Minnesota Vikings… My favorite player growing up was Randy Moss.

A house for my momma.