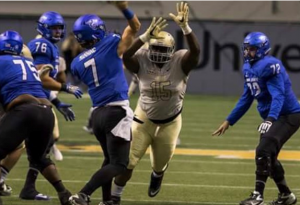 Glen Antoine is a big boy with a motor. Idaho’s run stopper is a machine in the middle of the field

I volunteered for Special Olympics.  It was a great experience.

I was born in New Iberia, LA and grew up in Round Rock, TX (near Austin).

My Dad because he taught me everything that I know.

Yes, I played baseball and my positions were pitcher, 3rd base and 1st base.

Yes, in high school, I played OL and Center.

At your position, what separates you from others? I am an elite run-stuffer.

I can take up the double teams and free the linebackers so that they can make plays.

I like to study my opponent and look for bad tendencies that they may have.  I also look at their blocking style and if they are too heavy on their feet.  I just try to observe anything that will get me ahead against the opponent that I face.

The toughest player I ever faced was the Colorado State guard #56.

My coach always told me that he would compare to me Vince Wilfork of the Houston Texans because of his great run-stopping ability.

When I was in elementary school, I struggled academically.  I had to work really hard to catch up.  With God’s blessings and my parents assistance I was able to close the gaps.  In high school I took AP classes and I completed my years at the University of Idaho with 2 degrees.

I always pray before the game and listen to my music.

My biggest strength is my ability to stop the run and my power. 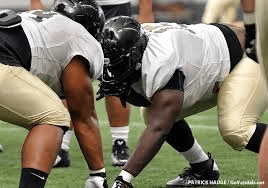 In the scheme that we played in, I was always pulled out of the play on passing downs, so I was unable to showcase my pass rushing skills as much as I would have liked to.

I would let the GM know that I have a good character.  I have not had any off the field issues to deal with.  I am hard working, selfless and a team player.  I also possess a skill that a lot of NFL teams need…being extremely physical at the point of attack.  I can command doubles and not get moved.  Once engaged in double teams, I can shed the double and consistently make tackles.  On passing downs, I can create push up the middle and put linemen in the lap of the quarterback, which we all know that quarterbacks hate getting pressure up the middle.

My favorite player was Glenn Dorsey.

My paternal and maternal grandmothers (who have passed away) and the third person would be President Obama.

I am not planning on making any big purchases initially.  I want to make sure that I am financially stable before I decide to buy anything big.