Former Lions player arrested again; He is crying in his mugshot 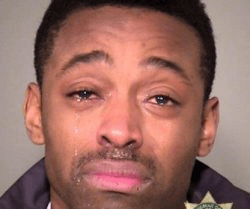 Former Lions defensive back is sad in his latest arrest

Ladies and Gentlemen, Stanley Wilson is at it again.  He has been arrested once again, and once again he was naked outside a person’s home, according to Pro Football Talk.

The Oregonian reports that police in Portland arrested Wilson on January 10 after finding him naked outside a stranger’s home. Wilson hasn’t posted bail and has been in jail since.

Wilson was also arrested on June 22 after a homeowner caught him trying to break into a house. The homeowner shot him and he ran off, and when the homeowner called 911, emergency personnel arrived and found Wilson outside the home, also naked. Wilson suffered only minor injuries from the gunshot.

He was drafted by the Detroit Lions in the third round of the 2005 NFL Draft. He played college football at Stanford.