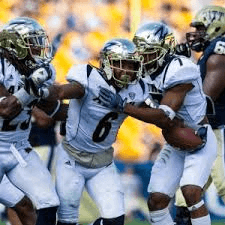 The coolest thing I’ve done off the field is every Friday before home games going to the children’s hospital to visit kids. As well as every Thursday going to an elementary school and mentoring a kid I was paired up with.

Humanities by far had to be the hardest class I’ve taken in college by far.

My role model is my parents. Seeing how hard they work for me and my siblings despite being separated they always make sure we are taken care of. They’re blue collar workers.

At my position what Separates me is my tenacity, my iq for the game, and my physicality as well as my play making ability. A lot of people say they’re playmakers but the film doesn’t back it up. You turn on my film and you’ll see all those things I said that separates me. I can play any coverage from zone to man as well as techniques.

When I’m breaking down film the first thing I like to break down and look for is the down and distance. Then the formation seeing how they line up as well as splits and personnel. I also look for how a wr comes out of his breaks and how he stems. Is he physical or not. As well as how often a play is ran and out of what formation it’s ran out of.

The toughest player I ever faced had to be Tyler Boyd who’s currently a rookie WR for the Cincinnati Bengals. We had two years of head to head matchup and he had it all. We battled it out definitely.

I would compare my play to Joe Haden. Because he’s always been my idol since I trained with him coming out of high school. He has a knack for the ball and is a playmaker as well as he has great technique. And loves the game. I also can say Tyrann Mathieu as well.

The biggest obstacle in my life I had to overcome was going to Hargrave military academy after coming out of high school with no offers and competing with some of the best guys in the country. I overcame it by competing day in and day out on and off the field. And earning a scholarship to Akron.

My pregame ritual is simple wake up in the morning turn on TD Jakes and listen to his sermons and say a prayer. Then before going onto the field just listening to my same playlist I’ve had for years. And saying a prayer right before kickoff.

My biggest strength is my technique and physicality. As well as IQ of the game

My biggest weakness is tackling at times. I could be more consistent in tackling better.

I’m a blue collar worker. I’m willing to do anything and everything to be the best player I can be for your organization. I’m not a problem off the field. I can play special teams as well as any other position in the secondary. I’m a leader and not a follower. I can learn a playbook fast and I can also fit in into any scheme zone or man.

My favorite team growing up was the Baltimore Ravens.

The first big item I would buy in the NFL I would have to say my dream car. A Range Rover!