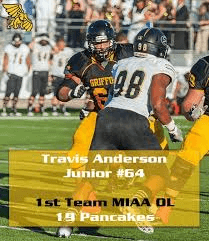 What is your Height/Weight?
6’2″ 305 lbs.
What is your position?
Guard and Center
Where do you play college football?
Missouri Western State University
Football is about giving back, what is the coolest thing you have done off the field?
Going down the Helen Davis School, which is a school for individuals with disabilities and being a part of their annual spirit day. We started a game of catch and I let one of the kids pancake me and the kids went crazy.
What was the hardest college class you ever had to take?
Anatomy and Physiology
Where are you from?
Derby, Ks
Who is your role model, and why?
My role models are my parents, they have sacrificed so much to get me and my younger brother to where we are, and I cannot be more grateful.
Did you play any other sports growing up?
In High School I wrestled and threw shot and discus
Did you play any other positions in football?
In little league I dabbled in some defensive line, but I have been on the offensive line for my entire playing career
At your position, what separates you from others
Relentless effort, giving me the ability to make blocks down field that I should have no business making
When you are breaking down film, what do you look for?
When I watch my opponent I look at what are the defensive linemen’s favorite pass rush moves, do the defensive linemen like to penetrate or are they going to try to hold their gap, do linebackers flow heavy over the top or do they like to back door. I will also look at the other offensive lines and see what they had
Who was the toughest player you ever faced?
The toughest players I ever faced were in practice, guys like David Bass and Arbanas Elliot
If you could compare your play to one player in the NFL who would it be and why?
The player that I have always tried to replicate is Olin Kreutz. He was a bit undersized, but he was a perfectionist and made up for what he lacked in toughness and effort.
Do you have any pre-game rituals?
The morning of game day I listen to classical music, then 2 hours before the game I will change it to hard rock like Skillet or A Day To Remember
As a small school football player what obstacles do you feel you have to overcome?
I feel like as a small school player I must overcome the lack of exposure. At the end of the day good football is good football and the film will not lie
What is your biggest strength?
My biggest strength is my effort, I will always work harder in the off-season and play harder during a play than the man across from me 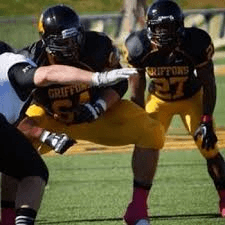 My biggest weakness in my game right now that I need to work on is bending. I need to transfer my flexibility on to the field and play lower on a consistent basis.
If I were a GM and gave you a second to sell yourself, what would you say?
You will not find a player out their that will work harder for you. A player that will give you everything he has everyday and will never stop improving and mastering his craft.
Who was your favorite player and/or NFL team growing up?
My favorite player growing up was Kyle Turley and the St. Louis Rams
If you could have dinner with three people dead or alive, who would you choose?
My Grandfather, whom I never met, Jon Gruden, Will Ferrell
With your first NFL paycheck what would you buy?
Pay off student loans
Rapid Answers:
Related TopicsNFLNFL DraftNFL Draft Interviewnfl draft notesNFL Draft Prospectnfl draft prospect 2017nfl draft rumors and rants