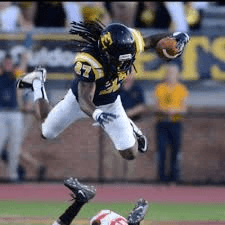 ETSU cornerback Tavian Lott is a gamechanger. He can make plays and help his team out

Going back to my high school and being hands on with the younger guys whether its advice or helping with their technique.

My mom is my role model, she raised 3 kids on her own and never give up on us.

My knowledge of the game.

The formation, down and distance, what routes they run out of the formation and how they run their routes and which side of the field they target the most.

Malcolm Butler, he doesn’t back down from any challenge, he goes hard every down.

Yes, I only eat candy before and during the games. I also pray on the field( pre-game) and before the start of the game.

The stigma “ not playing against enough competition week in and week out” FCS has dawg’s just like the FBS guys. 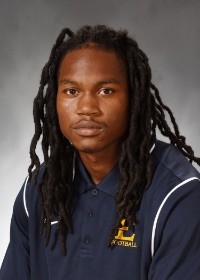 I can’t pin point that out right now.

Where I come from no one makes it. It’s a blessing to be here right now, not only is this a childhood dream but an outlet to take care of my mom and daughter. There’s a million ways to make money and this is my way. When its time to come to work….I’m clocking in. I want to be a staple in the game one day!

My great grandpa, my auntie, and Malcolm Butler

Get my mom a brand new car.