Stanford RB Christian McCaffrey is leaving for the NFL 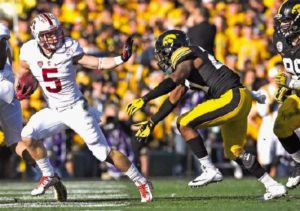 Christian McCaffrey Is leaving to the NFL

Christian McCaffrey is leaving Stanford for the NFL.

In his sophomore season in 2015, he was the AP College Football Player of the Year and the runner-up for the Heisman Trophy. He holds the NCAA record for most all-purpose yards in a season with 3,864. He is the son of former Stanford and NFL wide receiver Ed McCaffrey and former Stanford soccer star Lisa McCaffrey