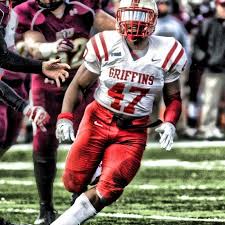 Athletic Ability: Boynton is an athlete that can run from sideline to sideline in coverage & in pursuit. With good foot quickness & agility, he maintains okay body control.  He has good speed & burst to get to the ball.  He is athletic enough to cover RB’s on most routes during pass plays.

Against the Run: Boynton is pretty quick at reading & reacting to both inside & outside runs. He can be a bit too aggressive at times, but when under control, he can make the play against the ball carrier.  He shows that he can fight & move through traffic to stop inside runs.  On outside run plays, he shows the ability to chase down the RB.  His over aggressiveness at times can possibly cause him to be a liability against RBs who can cut back on a play.

Pursuit/Tackling: Boynton can bring down the ball carrier very well despite not always having the best form. He is a physical tackler who can wrap up an RB or QB on a pretty consistent basis.  The way he pursues the ball is good, but needs to improve on the angles that he takes from time to time.

Pass Rush Ability: He’s very aggressive when rushing the passer, using his speed and a swim move to get around pass blockers. He does tend to take on offensive linemen head on with a high pad level, which can be improved on with time.

Pass Coverage: Boynton isn’t the most fluid defender against the pass, but shows that he has okay coverage ability. When playing zone, he can turn & break on the ball quite well.  While he can cover a running back when playing man coverage, he gives up a lot of size when covering a tight end.

Competitiveness/Toughness: Boynton is a competitive linebacker who shows that he can play downhill with a physical presence. His high motor allows him to fight his way to the ball, and take on contact when in pursuit. 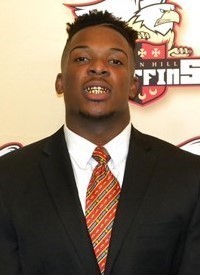 Strengths: Boynton has good speed, agility, quickness, and closing ability for an inside linebacker. He’s physical when taking on blockers, and when taking down the ball carrier once he gets his hands on him.  He has good instincts when diagnosing a play, and can pursue the ball well.  In pass coverage, he can close on the ball quickly, and stay with his man on most routes.

Weaknesses: He lacks the typical size for an inside linebacker in a 4-3 scheme. He can be too aggressive at times when pursing the ball carrier, or when rushing the QB.  He plays with a high pad level at times, especially when taking on pass blockers head on.  His level of competition will be taken into consideration as well.

Summary: Boynton was a productive 2-time 2nd Team All-PSAC West selectee at inside linebacker during his last two seasons for the Seton Hill Griffins.  In 2015, he totaled 103 tackles, 11.5 tackles for loss, and 2 sacks.  He ended his 2016 season with 87 tackles, 9 tackles for loss, 4.5 sacks, and 1 interception.  Despite being undersized for a typical inside linebacker, he has good speed, agility, quickness, instincts, and a high motor.  He plays with a competitiveness & toughness that allows him to close onto the ball quickly in pass coverage, and in pursuit against running plays.  Even though he can be overaggressive, he can wrap up & take down the ball carrier well.  He is not afraid to take on blockers, but does play a bit high when engaging them head on.  While productive at the Division II, he will need to show that he can be just as productive at the pro level against bigger & faster competition.  Right now, I have Boynton graded as an UDFA.  He could be brought on to an NFL team as a minicamp or training camp invite, but could possibly be considered as a late round CFL draft pick if the NFL overlooks him.