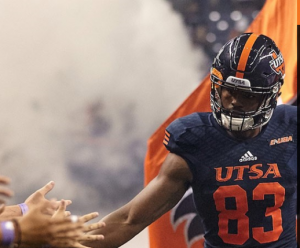 JaBryce Taylor is a big boy with hands. He is a touchdown machine

The University of Texas at San Antonio

I’ve went to multiple schools and talked to little kids about what I do on a daily basis and what it takes to get there.

Dez Bryant, because we came from the same high school, and I broke all his records he had set there.

I played basketball all the way until my sophomore year in high school.

I play a little quarterback my freshmen year of high school.

My mindset that I have about attacking the ball, it’s mine or no one else’s. The ball is precious to me.

I’m looking for those weak spots in the DB’s, like what routes do they jump on the most.

The Arizona State secondary, just because they are bigger corners than normal.

Dez Bryant, because ever since he was in high school I’ve just been picking his style of play apart piece by piece and applying it to my play on the field.

Just go into a corner, listen to music, pray and imagine making plays throughout the game. 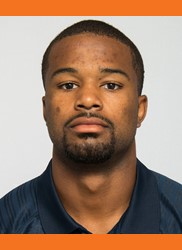 Confidence in myself, and catching the ball

I’m a bigger receiver so I’d have to say my speed isn’t where I want it to be right now.

My name is JaBryce Taylor and I just want to play the game of football and be successful. I just bust my butt everyday out of fear of going back to where I came from.

HOUSTON TEXANS!!! Andre Johnson was my favorite player of all time growing up.