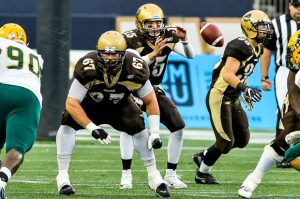 Geoff Gray is a big boy, who will showcase his talents at the E/W Shrine Game

Former teammate, Rob Smith. Taught me to play with an aggressive ‘edge’.

First year at U of M I played d-line

Athleticism, effort, and understanding of the game.

Of myself; body position, leverage.

I don’t like to compare my play to others. I feel everyone has different strengths that dictate how they play.

I tore my calf during football spring  camp a couple years ago. The injury prevented me from going to Canadian national weightlifting championships, there was also a chance I would miss the start of the football season. Stayed positive and was diligent with rehab. I was able to return to football in time for training camp and didn’t miss any games. 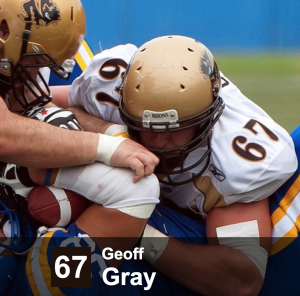 Over analyzing during the play causing me to slow down.

Can’t get a better work ethic. Love to train and am a student of the game.

My Mom and her parents which I was never able to meet.

None, I’d buy really nice bacon, cheese and coffee all the time