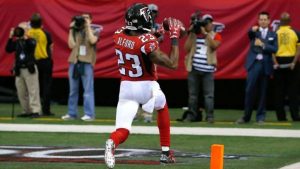 The Atlanta Falcons have signed cornerback Robert Alford to a four year deal worth 38 million dollar deal that includes 21 million in guaranteed money.

The fourth-year corner from Southeastern-Louisiana has played in 53 games with 41 starts for Atlanta. Alford has recorded nine interceptions, returning two of those interceptions for touchdowns, during his career. His two defensive touchdowns rank tied for first among players selected in the 2013 NFL Draft, and his nine interceptions rank second.