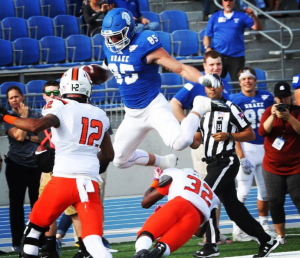 Our team “signed” a young boy named Jack who has battled brain tumors and is still fighting to get healthy. Visiting him and hanging out with him at practice and games makes you realize how blessed you really are. He scored a touchdown in our spring game which was really awesome. He has a long road ahead still but he’s doing a lot better now.

My Dad. He has taught me about sacrifice and has pushed me to pursue my dreams. I really want to make him and the rest of my family proud.

In high school I also played defensive end, and am on every special team except kickoff.

My versatility and athleticism sets me apart. I can be attached as a tight end one play and then split out the next. It’s been really effective at the college level because defenses can’t switch personnel. My athleticism translates into things like running routes, high pointing the ball and running after the catch to name a few.

I look for tendencies, as well as weak points that I can potentially expose in a one on one match up. I also like to watch the other teams’ tight ends and receivers to see what works and doesn’t work for them.

Deiondre Hall from the University of Northern Iowa

Tyler Eifert, he’s a big athletic tight end that runs clean routes and loves to go up and catch the ball.

My dad was deployed overseas in 2003. He was stationed in Ballad, Iraq for a year flying Blackhawk helicopters. It put a lot of pressure on my Mom and it was hard a lot of the time. I feel very blessed that he made it home safely.

I like to clean my house/apartment the night before every game. I also make sure to listen to the same few songs every pre-game. 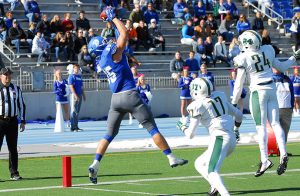 Eric Saubert has accepted an invitation to play at the E/W Shrine Game in January.

I’ve been overlooked time and time again. Be the man to give me a chance and let me prove that I belong. I don’t aim to be the typical small school player that makes a camp or a practice squad and fizzles out. I want to be the guy that a team can count on to make plays and help contribute towards a super bowl.

Julius Peppers on the Chicago Bears

My two brothers, Mikey and Tim, and my sister, Danielle