Eric Dickerson will be mad; Jeff Fisher and Les Snead given contract extension by Rams 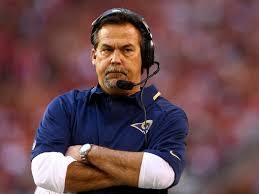 Jeff Fisher is safe for now

Rams have given Jeff Fisher and Les Snead a contract extension according to Ian Rapoport of NFL Media.

Per Rapoport, the deal was agreed to in the preseason and was signed during the season.

In addition, the Rams also have signed general manager Les Snead to a contract extension beyond 2017, a source informed of the situation told Rapoport.

Kevin Demoff said this to Steve Wyche about Jeff Fisher.

“Everybody will want to judge Jeff through the prism of just the record, but that’s totally unfair when you look at the set of circumstances he was handed this year,” Demoff said. “It was different than any team in the NFL.

“We moved halfway across the country, then had OTAs in Oxnard. Training camp was in Irvine, now we’re in Thousand Oaks. We moved coaches and players and families. To provide leadership and consistency, he’s done a model job.”