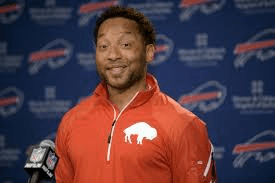 Honestly, can Doug Whaley do any worse of a job hiring a head coach?

Many people will sit here at talk about Doug Whaley as if he is the bad guy, but he has had a lot of success at finding talent.

Doug Whaley was the guy that traded Kelvin Shepherd to the Colts for Jerry Hughes.  Yes, Jerry Hughes the 10 plus sack master.  Then he traded Kiko Alonso for Lesean McCoy.  Yes, Shady who was the only positive note on the offense this year.  Many will criticize him and dog him, but look at some of his free agent signings.  Lorenzo Alexander?  Anyone need a 10 plus sack man at the age of 34?  That is talented.  How about Zach Brown?  He was a Pro Bowl snub this year, I do not care what anyone says.  At the end of the day, the Buffalo Bills have a good GM and some good scouts. Shoot their team is good too, but they cannot gel for some reason.

This same defense ranked 4th overall under Jim Schwartz, nothing changed.  The offense actually was increasingly better under Anthony Lynn.

I think Doug Whaley needs to be given a shot to hire his head coach. It is not fair to him.  Shoot, Doug Marrone was hired by Buddy Nix, who later passed the torch to Doug Whaley. When new ownership came in they hired Rex Ryan to make a splash.  So technically this is Doug Whaley’s first head coach since he has been a GM in Buffalo.

I think he will hit the nail on the head, but they have to stop micro managing the team.  Let Doug Whaley do the job you hired him to do. Who knows, they may be successful.