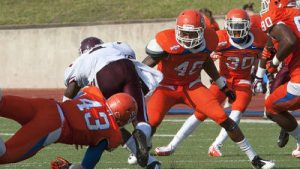 There was a pep rally at the local elementary school (in Huntsville) to get the students excited to take a state exam. I happen to be one of the football players selected to go and walk the hallways and speak some encouraging words to the youth, and it turned into one of my greatest experiences. We got to toss the football around with some of the boys at the school as well as mentor them, and that meant everything to those kids. We also got in front of the whole school and did our Bearkat chant, that really fired the kids up! Those moments are something I feel those kids will always remember.

Developmental Math, in my freshman year of college.

My father. He’s my role model because, he’s taught me how to handle every situation (good or bad) that has been thrown at me in my life. He has shown (by example) how to be the best father possible and how to take care of a family, the honest way. He’s only missed one game in my whole life. I can always count on seeing and hearing him from the crowd.

Basketball and flag football were my first sports at five years old. I did not play football again until I was eight years old and that straight into contact play. I did motocross through all of those years as well, stopping in the sixth grade to fully pursue football, basketball and track starting in the seventh grade continuing throughout high school.

I’ve played quarterback, running back, and slot receiver throughout my career.

My physicality at the point of contact, (especially when defeating blocks or playing bump and run) is just natural for me. I love to get in the opponents face and let my presence be felt. I take pride in the way I workout in the weight room. I take advantage of the size and and strength I have out on the perimeter.

I look for tendencies the opponent shows the most throughout the course of a game. I look at where the receivers align when running certain route concepts, or what communication the quarterback and the receiver may make pre-snap indicating a route pattern or some sort of tip.

Yedidiah Louis, a slot receiver from Sam Houston that I went head to head with everyday of practice while I was playing nickel. He’s one of the best athletes I’ve ever faced during my defensive back days but definitely the best receiver

Tyrann Mathieu. I compare myself to him because, he’s not the fastest, quickest, or biggest player on the field but he does bring great energy and tenacity to the game, as well as I do. He plays relentless and can play any position within the backend making him very valuable to the defense.

The biggest obstacle would have to be losing the first five games of my senior season due to academic suspension. I failed a class during the summer session, causing my GPA to drop below what’s required to be eligible. I fought daily keeping hope alive that I’d return to play each week, but each week I was let down. I never lost my faith in God and that’d he’d allow me to return on his time. After being out for five straight weeks, focusing on nothing but getting myself back eligible. I was able to come back on the sixth game of the year and finish the season with three interceptions, forty-eight total tackles, two forced fumbles, ten pass break ups, and a sack. I also managed to accomplish a season goal of earning first team all- conference at cornerback playing in only six conference games.

I have to listen to music and meditate to myself in a quiet environment. I typically listen to Wiz Khalifa and Marvin Sapp to calm my nerves and focus in on playing a football game. 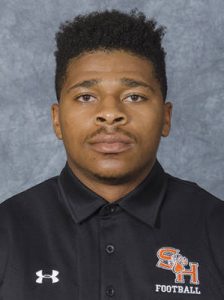 The ability to take coaching and apply it to my game.

I feel it would have to be playing off coverage out wide. I played cornerback for half a year during my college career, so I was kind of thrown right into the heat of the battle without much preparation at the position. With good coaching I progressed as the season went on, but I feel much more comfortable playing press technique getting hands on now to help challenge the route and throw the timing off.

I am a young man that is going to keep my nose clean on and off the field. I will not be a distraction in the locker room. I don’t mind playing special teams or playing whatever role you have for me. I’m about contributing to the team in anyway possible. I accept coaching well, and I will work tirelessly to get better each day.

My uncle who passed away in 2013, Kobe Bryant, and Patrick Peterson

If I sign a contract, I will probably purchase my parents a nice house to repay them for some of the things they’ve done for me.