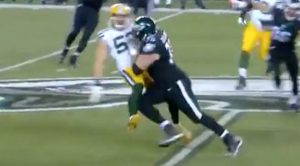 This past week the Green Bay Packers may have won the game over the Philadelphia Eagles, but Allen Barbre the offensive lineman of the Philadelphia Eagles and the former Packers draft pick had the block of the year.  On a reverse to Bryce Treggs, Allen Barbre peeled back and spanked Clay Matthews on a block that put him out the game for a while. Matthews was asked by reporters about the block and he immediately said it was a cheap shot.

“I wasn’t a fan of it,” Matthews said of Barbre’s block, via ESPN. “I mean, I’ve got a lot more to say about it, but I’m going to say it behind closed doors. It was cheap shot, but it is what it is. I hate it. Unfortunately I landed on my shoulder, and that’s kind of what I’ve been dealing with since. They didn’t throw a flag probably because I wasn’t a quarterback,” Matthews said. “I know all about that.”

“There’s some swelling [and] bruising, but we got an X-ray and nothing’s broken so that’s good. So we’ll see moving forward the progress I make going into this game. That’s ultimately the goal, but we’ve got some work to.”

Sounds like he may be a little sour because he was injured, but at the end of the day, it was a clean block.