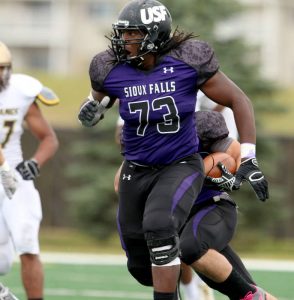 Antonio Green is a big boy with speed and power

The University of Sioux Falls

Tim Tebow spoke at a FCA event in Sioux Falls. At that event, a girl with disabilities asked me to run through a football drill with her. At the end of the drill, she was the happiest person in the facility. That was probably the coolest thing I’ve done off the field.

My Parents are my role model. They were never married, but they managed to work together to get me where I’m at today

I threw the shot put and discus

Having the ability to make a quick decision when needed. Athleticism and aggressiveness

Stance, alignments, how do they play the run, and what’s their favorite pass move.

Trent Williams, LT for the Redskins. We are very athletic to be offensive lineman.

My biggest obstacle was turning down my division one offer from Western Kentucky because of academic reasoning. I overcame that by praying to God and never giving up.

I have three specific music categories that I listen to on every game day. Gospel first, Rnb second, and Rap third. 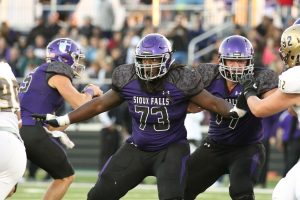 Can be hard on myself at times

I am a hard working player that leads by example. I promise you that I will give everything I got to compete and help this organization win games.

My favorite player was Warren Sapp.

My mom a brand new car because she never had one