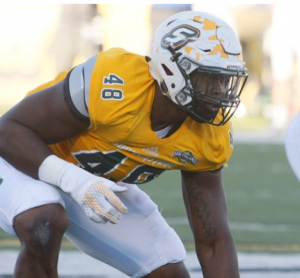 Volunteered at a local elementary school twice, we read books, did an obstacle course for the young children, and served food to the children

The hardest class I would have to say I took was an Finance class, but I was successful in passing it

I would have to say Khalil Mack, his work ethic on and off the field, how dominant of a force he is, and the way he gives back to the community and younger crowd

No other sports, first time playing football was my senior year of high school.

I feel that I have multiple sets of tools that separate me from others ( size, speed, knowledge of the game, being a playmaker, and playing with relentless effort)

First I look at OL check for run/pass looks & see if they have any weakness that I can attack. Next I look at formations in whether they indicate run, pass, and screen. Next I pay attention to the QB if the QB can move around and be mobile that determines what type of rush moves I can use.

Cameron Artis-Payne , played against him 2012 when he was at Allen Hancock College, I was a freshman.

If I had to compare myself to a player it would have to be Cliff Avril, because of the long arms & quick first step he has. Always because of edge rush he posses beating tackles on the edge.

Tore my ACL New Years Day 2014 and had surgery the next day. Doctor told me that it was a possible that I wouldn’t be able to get back on the field until about 10-12 months after the surgery. Sitting at home I had thoughts of calling it quits at times. I prayed to god every night, and worked 10x harder in rehab. Less than 6 months I was back on the field 100%. I feel like it made me the player I am today.

Yes, I listen to Kendrick Lamar and Young Thug before every game, they get me in my zone.

Kevin Hart, Jay-Z, and my Grandma who never had a chance to meet.

My Mother a house