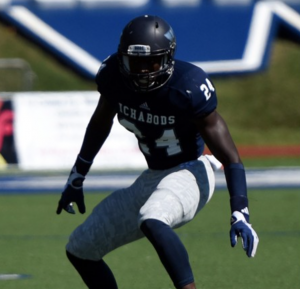 Talked to a group of high school seniors about the importance of school despite their upbringing.

My sister. She was always there for me and she worked hard to take care of herself.

I’m a smart player. When I line up I already have a general idea of what is coming.

First I determine whether this is a short pass or long pass team. Then I look at what each receiver does when he is given different leverages. If they have tendencies when running the routes or rise during their breaks. I check to see if they don’t like being touched and can consistently create space in press coverage. I also check if their route changes depending on what you give them. When I don’t look at receivers I study the quarterback and sees if he likes a certain side or receiver.

Darrelle Revis. He is a silent assassin on the field. You don’t see him really talk trash or do any theatrics, he just lines up and does his job each play.

Learning how to take care of yourself. Although I am a student athlete I still have bills to pay and football doesn’t cover everything. So I always worked full time over the summer and part time throughout the spring. I had to actually learn how to pay bills, and keep everything in an organized manner just in case. And then when disputes came I had to be able to articulate myself well enough and argue why something was wrong and have evidence for such. Also with that I had to manage my time well enough to give both football and schoolwork the necessary amount of time needed to excel at both.

I always have Reeses before each game and listen to music.

My mind. If you are a smart player you won’t have to rely on your athletic ability as much.

I’m too aggressive sometimes and put myself in bad positions. 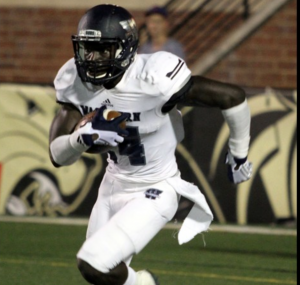 I will not be outworked. The beautiful thing about football is that you only have a limited number of opportunities to actually play the game and it won’t be cheated.   You only get out what you put in and for that reason you have to love the process. The running, the lifting, the months of preparation and getting better every day knowing that you are among the few in this world that get to play this game. Then if you are from a small school like myself you have to work that much harder just to get noticed. Already knowing that once you get noticed, they are going to question your level of competition. But football is football and one thing that they won’t be able to question is my work ethic.

Jerry Rice and the Colts

Fix or move my family’s house.