Worked at a few football camps during the summer and I always work out with young aspiring football players when I’m back home, as well as teaching them the game

Hardest class was Oceanography by far. That class had me going crazy when I was in JUCO, lol

My role model is my pop-pop. He was a great person and he always made sure his family was straight at all times. The true definition of a stand up man

I played baseball, basketball, and football. But football is just different that’s why I gravitated to it the way I did

I literally played ever position in football besides center. But receiver is where I excel at

What separates me from others at my position is the dawg mentality I play with. I call it that switch, a lot of receivers just play to play. I play to make an impact, I want to be feared by my opponent

When breaking down film I look at my opponents tendencies and weaknesses. That allows me to attack and also counter everything I know they’re going to do

The toughest player I ever faced is my twin brother Tyree. He plays corner back, he’s the toughest because we’re literally the same size and we have the same speed. He knows all my go to moves and weaknesses. We just real competitive.

I honestly cant compare myself to any other receiver in the league. I just do my best to be the best receiver I can be.

The biggest obstacle I had to overcome was making it out of junior college. My JUCO was all the way in California and it was an everyday struggle. Living with 13 people in a 2 bedroom apartment and being hungry 75% of the time. That whole situation made me the man I am today. That’s why I’m still chasing this dream because God allowing me to make it out of that situation is reassurance that he has a plan for me

I wouldn’t say pregame rituals but I make sure I always roll out my lower body so that I’m loose, and I listen to Meek Mill. He the only rapper that talk that pain and he motivates me

My biggest strength is definitely my speed. The ability to run past defenders press and off coverage is something God blessed me with and I’m thankful

The only weaknesses I would say I have is probably my ball skills. Sometimes I miss judge the ball in the air, making a catch harder than what it really is 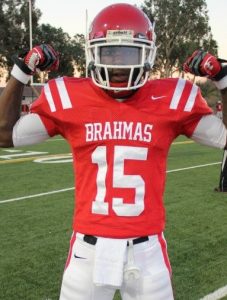 I would say that I’m a not cocky but humble individual that can make the splash play. Will most likely be one of the fastest if not the fastest player on the field at all times. A player that plays with emotion and he knows his WHY

My favorite team growing up was the Eagles. I have too many favorite players just can’t name one

Honestly I never been a hype person to spend money for real. But I always wanted an Audi and to buy my mom a house, definitely got to make sure my family is straight.