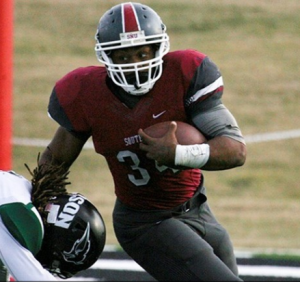 Terence Olds of SNU is a hard runner that gets the job done.

I went to Haiti when I was at OU and we went over there to help build houses.

Adrian Peterson because I love the way he carry his self as a football player and person. I have met Adrian Peterson and he is a wonderful guy his play speak for it self. Ray Lewis is my other role model because he has this no man will be able to stop me attitude and I love it.

When I look at film I look for players bad habits, see what they do well and beat it, and if they are disciplined in their position.

When I look at film I look for players bad habits, see what they do well and beat it, and if they are disciplined in their position. 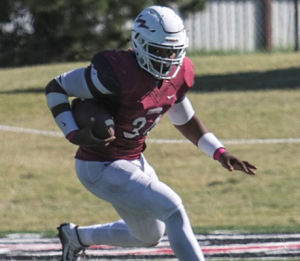 Adrian Peterson because we given a chance your defense will pay for its mistakes. We both have good vision and we both are powerful. There is no quit in us at all and we both mentally strong.

The biggest obstacle I had to face is walking on to OU it was not easy walking on either they made me go through hell. I just stayed in the fight and keep improving on what they wanted me to do and eventually. They gave me a chance because I didn’t quit and I was getting ahead extra work away from football is what put me ahead to get that shot.

No not really expect just bunch of prayers.

Feet Work could be better.

I will do whatever I have to do to improve in any aspect you feel necessary. I might not wasn’t the top scout coming in, but none of those players are willing to sacrifice what I am willing to sacrifice. I have something that beat on my chest that is not shirt form and it is not made from this earth. I am not made of this earth come from a place that is far greater. If i do not know I will learn it, if I am to weak I’ll get stronger, if I am not fast enough I’ll get faster nothing that I can control will stop me.

A dependable car will be the first thing