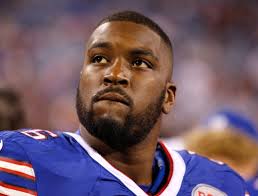 The Buffalo Bills tried to trade offensive lineman Seantrel Henderson before the NFL trade deadline according to multiple reports.  The only problem is the Bills were not able to swing a trade.  The Bills would have been lucky if they were able to get something for him because he is now facing another suspension.

According to Ian Rapoport the Buffalo Bills offensive lineman will be suspended for 10 games following his second positive test for Marijuana.

According to the NFL’s Policy and Program for Substances of Abuse, he can appeal his suspension. He plans on appealing the ruling and a final decision is expected to come this week.