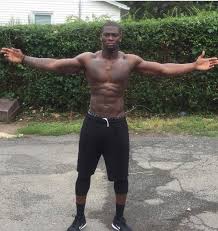 Ruben is a physical freak. This kid is a specimen on and off the fieldRuben Demosthene, DE/OLB (Sr.), South Nazarene University

Athletic Ability: Demosthene is a good athlete with the ability & versatility to play DE in a 4-3 defense, or OLB in a 3-4 defense. He has pretty quick feet that allows him to have a good first step at the snap of the ball, and slip into gaps. Despite being out of control at times, he can move through traffic to get to the ball, and make a tackle. His athletic ability & change of direction shows when pursing the ball carrier, and when getting by blockers.

Competitiveness: Demosthene is a player who has a very high motor that doesn’t stop until the play is over, whether he makes the tackle or not. His production level has stayed at the same rate throughout his career, and seems to be the most productive against inside runs. He shows explosion to beat the OT outside with his speed & hands. While not the biggest DE, he can hold his ground despite getting stacked up at times, and can get free to make a play. He can chase the ball down on most plays, even when the play is going away from him.

Mental Alertness: My main concern with Demosthene is that he can react to a play too fast, which may cause him to be a liability to outside runs towards his side. He has good instincts when coming off the ball at the snap, but can get stacked up at the point of attack if he has to stop & find the ball.

Strength/Explosion: At 245 pounds, Demosthene is a bit undersized for a DE, but makes up for it with his explosion off the line, and okay hands. With no injury history of note, he looks to be pretty durable. Against the pass, he can beat the OT with his explosiveness & hands, and he can jump inside gaps to make plays at the line of scrimmage against the run. His closing speed is pretty good where he can get to the ball carrier and get his hands on him. Despite playing with high pad level, he can still shed his blocks and get to the ball. 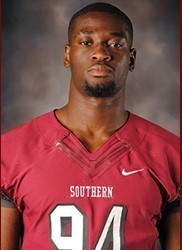 Strengths: Demosthene is athletic to the point where his explosiveness & speed make him a threat against inside runs, and against the pass. He can shed blockers, and pursue the ball all over the field with a high motor on most plays. With quick feet, he can shoot into gaps between linemen, and be disruptive on inside runs, and get around OTs on pass plays.

Weaknesses: He is somewhat undersized for a 4-3 DE or 3-4 OLB, but he has the frame to add weight if needed. He plays with a high pad level, and can get stacked up when trying to find the ball. He can react too quickly on a play to the point where he could be out of position at times. Not very productive against outside runs, and he doesn’t have many other pass rush moves other than a swim move. He shows the ability to get to the QB, but doesn’t show that he can take down the QB.

Summary: Demosthene is an athlete who can make an impact with at least a year or two of development with good coaching. Right now, he seems to be better attacking inside runs than setting the edge & making plays on outside runs. With a better pad level, strength, and more weight to his frame, he can take on pro linemen at a much better rate. I like that he has the ability to line up with his hand down as a 4-3 DE, and play standing up as a 3-4 OLB. He’s far from a finished product, but can be a serviceable defensive lineman. With his speed & explosiveness, I see him as a pass rushing LB right now at the next level. I have him graded as a UDFA who could receive a minicamp or training camp invite, but a strong combine and/or pro day can improve that grade.