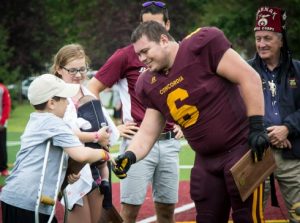 In past years I volunteered with a couple of my teammates where we ran an after-school sports program in a local school over the span of 10 weeks. We played games with the students and taught them about the importance of being active, working together as a team and having fun.

The hardest class I ever had to take was a philosophy class called Critical Thinking.

My dad is my role model because he always puts our family before himself. He is very hard working, dedicated and has supported me throughout my entire life.

Yes, I was a wrestler

I feel that my strengths are in my hands, my ability to move people and shed blocks. My wrestling background allows me to use my opponent’s weight against them.

I look at the tendencies of the offensive lineman, which way he leans on certain plays, his stance in run plays compared to his stance in pass plays and how they shoot their hands.

Charles Vaillancourt and Roman Grozman are the toughest players I have ever faced.

I would compare myself to Ndamukong Suh because I dominate the middle and command a double team.

When I was a child I had to immigrate from Albania to Italy and then shortly after I moved to the United States and then to Canada. The moving did not have that much affect on me, however, moving from the United States to Canada was very difficult because it felt like football was being taken away from me and I had to live in a culture that was not as passionate about football. What made it more difficult was that it took place during my teenage years, which was a very critical time in my life with regards to football.

I pray to our Lord and Savior for giving me the opportunity to work hard and play the sport I love.

My biggest strengths are my ability to make plays in crucial moments and have a sense of where the ball is at all times.

I would say that I always put the team first and would do whatever is being asked of me to the best of my abilities; I would not let you down on or off the field.

My favorite player was Barry Sanders and my favorite team was the Detroit Lions.

If I could have dinner with three people they would be Leonardo DiCaprio, Tom Brady and Bill Clinton.

I would buy a house for my parents