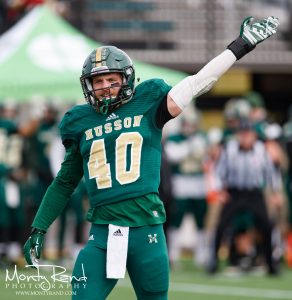 Rick Orio of Husson is a game changer. His motor is never ending.

Every summer since I have been at Husson University I have worked as a middle school camp counselor at the local recreation center. It is amazing to see the impact you can make on several kids in such a short amount of time. Being a youth track and field coach was also very rewarding and a valuable learning experience. I’ve also volunteered at local youth football camps as a coach. Camps such as the Gabby Price Youth Football Camp, which is a camp in Bangor, Maine. It’s amazing to see the joy you can bring to a young athlete’s face with even the smallest of gestures. One of the many reasons football is so beautiful.

I can’t quite remember the name of the class, but it was an art class freshman year that focused on the “gothic” era of the fine arts. Let’s just say it was not my style. I toughed it out.

I was born in Stoneham, Massachusetts, grew up in Longview, Texas, and moved to Maine at the age of 14. I have lived all over the place, but I have always taken pride in being from Massachusetts.

I have two role models. One of my role models is my mentor and high school/USATF track and field coach Taylor Harmon. Taylor recently passed away, but I will always carry the work ethic, passion for others, and countless other qualities he instilled in me for the remainder of my life. My other role model is my current head coach at Husson University, Gabby Price. Coach Price is the most caring, passionate, dedicated man I have ever met. His love for his players is unwavering, and his passion for the game of football is contagious. Every second spent with Gabby Price makes me a better player, leader, and teammate, but most importantly, a better man.

I don’t think there is a sport I haven’t played at least one season of at some point in my life, but in high school, I ran 4 years of indoor track during the winter, outdoor track in the spring, and USATF National track during the summer. I was a state champion in the 300 meter hurdles and 4×100 meter relay my senior year in high school. School records in 3 events. I fell in love with track and field, but always used it to prepare for football.

I was a Pine Tree Conference (PTC) All- Conference wide receiver in high school. Cony High School in Augusta, Maine. I led the state (All classes) in all receiving categories my senior year (Fall 2009). I played wide receiver at the University of Maine for a semester. I transferred to Husson after finding out I only had 2 years of NCAA D1/D2 eligibility at the University of Maine. (I initially accepted a track scholarship to Eastern New Mexico University right out of high school. This started my “5-year clock” of D1/D2 eligibility that I was not aware of.) I played receiver for two weeks during preseason of my freshman year at Husson University before moving over to defensive back for the rest of my college career. Playing receiver my whole life gives me an advantage on the other side of the ball. In high school, I returned kicks and punts, played some running back, some quarterback, and every special team. I did whatever the team needed to win that week, but I was primarily a wide receiver and Rover on defense, playing some cornerback as well. At Husson University, along with starting every game on defense for four years, I played on every special team unit (excluding kickoff return) and took pride in doing so.

My leadership ability, tenacity, energy, physicality, instincts, practice habits, knowledge of the game, talent, work ethic (on and off the practice and game field), preparation (film, weight room, recovery, diet, offseason, etc.), passion for the game, intensity, charisma, focus, toughness, consistency, blue-collared mindset, and love for my teammates separate me from anybody else at my position. I’m Fearless.

When looking at film, I look for the tendencies of the opposing offense of team we are playing that week. In the offseason, all film is fair game, but in-season, only the opponent I’m playing that week. For example, I will look at an opponent’s personnel, formations, plays, reads, packages, situational tendencies, alignment keys, and the list goes on-and-on. After going through each game, I then study each receiver and TE I may match up with individually. Looking for tendencies, any and all. I go through each game available and visualize our defense in the exact same situation, reading the respective keys I would on that specific play, and visualizing what I would do, and the play I would and will make. I then look at each opponent I will face on each special team looking for weaknesses to expose. Always looking for ways in which I can do my job more efficiently. (gunner on punt, punt return, contain on kickoff) When analyzing myself post-games, I try to ignore the good plays and focus on the plays where I can improve in any aspect of my craft. You can always find something to improve through watching your own film.

Rasheed Williams was a running back at Alfred State University. He was a transfer from the University of Akron. I played against him my freshman and sophomore year (2013-2014). This guy ran crazy and almost single-handedly beat us two years straight. Great size, speed, strength, and running ability. Rasheed was a great competitor and easily the toughest guy I’ve had to tackle. After graduation, he played with the Detroit Lions for a brief period, and spent some time in the CFL. He is currently an NFL/CFL free agent.

Earl Thomas. I have the same body type and style of play as Earl Thomas. Thomas brings energy, focus, instincts, and palpable intensity to every snap of every game. Earl plays the defensive back position the way it is meant to be played. Earl’s love for his teammates is evident and his leadership ability is undying. I strive to emulate the play of Earl Thomas. Always where the ball is. Fearless. Always the most prepared man on the field.

The biggest obstacle I’ve had to overcome in life so far was finding a way to get a degree and to my goal of playing 4 years of college football. I overcame it by doing whatever it took. It wasn’t easy, and I wouldn’t have it any other way. 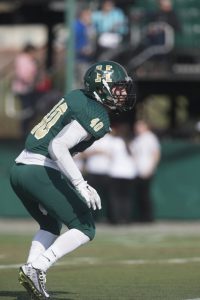 I pray at the 46-yard line before every game to honor my late Husson University teammate and friend Stephen Colvin. Stephen wore the number 46 as a defensive tackle, teammate, and dear friend of mine at Husson University before he passed away. Stephen is a big reason why I wear the number 40.That and music of course. Also, Visualization.

I’d have to say my leadership ability.

Overworking. Sometimes, I am on the field too much. I can’t get enough.

Rick Orio. Defensive Back from Husson University. I was a 4-year starter and three-time captain on the best overall defense in the NCAA (DIII – 2016) this year. Led the 2014 and 2016 Husson University Eagles to ECFC championships and the NCAA playoffs. For three years, straight I’ve led my team to the postseason. I am the type of man, player, and professional you NEED in your locker room. Not if, but when a team gives me the opportunity, I will prove I am the caliber of player and leader that truly is an any team’s, “must have.” You’ve never met another player like me. You’ve never met another player who loves the game of football and his teammates like I do. I’m a rare breed. Let me show you. It’s time to let the pads talk.

This is a tough one. It’s a toss-up between Ed Reed and Reggie Bush. Ed Reed is the best safety of all time (in my opinion). And Reggie Bush is one of the most electrifying offensive players I have ever seen play at the college level, and is a great professional. Too hard to pick between the two. Also, loved watching film of Deion Sanders and Barry Sanders as a child. Then spending hours each day in the front yard replicating their moves. My favorite NFL team growing up was the New England Patriots.

If you could have dinner with three people dead or alive, who would you choose?  Hmm. I’ll go with Albert Einstein, Muhammad Ali, and Pat Tillman

I wouldn’t buy any big items. I’d invest some of my money and save the rest for life after football. No need to live luxurious when you’re waking up and getting paid to do what you love most every day. One thing is for sure, my future children aren’t going to have to worry about living the life they deserve, and paying for their college educations.