Report: Charlie Strong is out at Texas; Will be fired this morning 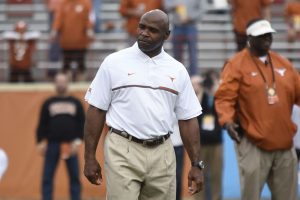 Charlie Strong is out as the Texas head coach

By the sounds of it Charlie Strong is done at Texas.  The program has been horrible under Strong going just 16-21.  According to Hornsdigest.com, Texas will move on from Strong and try to set up a meeting as soon as possible with Tom Herman.  The meeting could happen as early as today.

The Longhorns’ focus then will turn to getting Houston head coach Tom Herman to take over the football program, with a potential meeting happening Saturday at the earliest, according to HornsDigest.com, according to NESN.