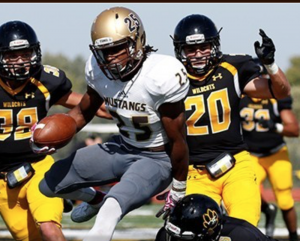 I was an assistant Sunday school teacher at my church for 4 years before I left for college.

My mom is my role model because she came to America as an immigrant, was a single mother with two kids and no college education .  Not once did she ever let any of us go without eating even if it meant she wouldn’t be able to eat herself she has always put us first.  I wanna live my life with that passion she had for us to succeed.

I played soccer all my life growing up and ran track my last two years of high school.

I played RB all my life until my last two years here at SMSU when I was moved to WR.

I think the biggest difference is my physicality has always surprises everyone that I have played with and against.

The toughest person I every faced would have to be Joshua Querbash my high school teammate/friend going against  him in practice sucked because I have never played a person that hits as hard as him with a passion for physicality like him.

I would say Steve Smith just because I play with a certain level of physicality similar to the way he  place the game with.

The biggest obstacleI I have had to over come is just making the most of what I had because growing up my family has never had much so I never had all the stuff I may have wanted to play sports, but we have always had each other support and found ways to make it work. 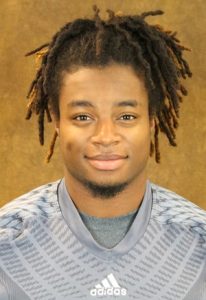 I don’t really have a pre game ritual but the day before every game I have always eaten a McDonald’s meal (2  Mcdoubles, 2 McChickens, 1 small fries)

My biggest strength is my ability to make people miss in small areas.

My biggest weakness is sometimes trying to be more physical  than I should be which sometimes takes yards away than what I could have gotten if I just made him miss.

My favorite player growing up was and still is Brian Dawkins, favorite team growing up has always been the Vikings.

Three people I would have dinner with would be Jesus, Martin Luther King, and Bob Marley.