How to pick an NFLPA Certified Agent to represent you 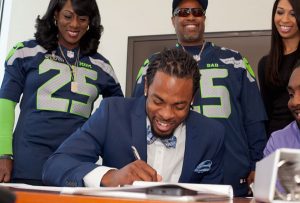 It’s that time of year again folks.  College Football is over for some teams, and agents are starting to hit you up.  That is great because it means someone is willing to put in time to work for you.  It is not easy to get your name out there, especially as a small school football player.  Agents may have been contacting you all year long on social media, but now it is crunch time.

Some players may already have a good idea who they want to select as their agent, while others may be still undecided.  One thing is for sure, many agents sound the same.  It is not always the easiest decision to pick an agent, but I have some advice I would like to share with you.  I am not a certified NFLPA agent, and I do not work for any agent so I am going to tell you honest information. I want you to know what to look for, and what to expect.  This article may be a little long, but it will be very informative.

We did a piece earlier this year on finding an NFLPA certified agent, and we want you to know how to do that. So if you click this link, it will direct you to the process of finding a certified agent if no one is contacting you at this point.

So agents are contacting you. Multiple agents are contacting you to sell you their services of being a sports agent. There are many different kinds of agents, but the important part to remember is it is your choice to pick the one that you get along with and feel will work the best for you. Some players want an agent that has contacts, others do not expect the agent to call to often or bother him.  They want a business partner so to speak.  While others want a person that they can relate to. A friend so to speak, someone that is going to go to war for them and treat them like family. Others want an agent that is going to just be a bank roll for them.  This one usually never works out for the agent or the player, but I am not here to sell you a dream, I am here to tell you the truth.

College football players who are Seniors in college can absolutely talk to agents, it is not against any rule or regulation. They can speak to them, they can meet with them, they can call them.  They CANNOT HOWEVER take money from them.  After the season is over it is a different story, but while you are still playing it is not a good idea.

So what does an agent offer?

Agents offer all kinds of services (If you ask them), but I will tell you what most agents will do.  Most agents are underpaid. They are not appreciated, and they work extremely hard to earn a very minimal amount of a players contract.  The NFLPA recently switched the SRA contract to read that agents can get from 1.5 to 3 percent of a players contract.  This was a move by the NFLPA to weed out agents, but it will not work, because they are the ones that put their hard earned money up for these players to get a shot.  The kid will not put up the money themselves, Period.  So what does that mean?

The NFLPA made the standard SRA (or contract) state that the agent could only receive 1.5 percent of the contract. Most agents however are not going to touch a player knowing they can only get 1.5 percent. Most agents pay for training as well (While sometimes it is outrageous and overrated). Some agents will tell the player from day one they will represent him but will not take the 1.5 percent, they will only take the 3 percent. I personally would not touch a player if I was not getting 3 percent, because the work you do for a player and the money invested in the player will never be recuperated if I do not get the 3 percent.  Did you know the average amount of money to train a football player is 5 to 7 thousand dollars? There are some places that charge 20,000 dollars for 8 weeks worth of training.  Let me tell you some really sound advice kids, THAT IS STUPID!!

Training is overrated in the NFL Pre Draft life.  It is very important to stay in shape, but most of the colleges that players attend pay a person as their Head Strength and Conditioning Coach who do the same thing these trainers do on the streets.  The crazy thing is they are FREE.  Not only are they FREE, you can stay in school and earn a degree to fall back on if you do not already have one.  You will probably get better one on one training with a Strength and Conditioning Coordinator than you will at a facility, because you will be sharing the facility with 20 other prospects that play the same position as you.  While I feel the price is insane, there are some trainers that can help you get better at your craft.  I think more players need to open up workshops during the off-season and allow players to learn from them.  I think that would be a smart industry because it could make the player some money and also help the kids, but who am I?  Anyway back to the subject, Training is expensive. SO if you want to be trained, you better start thinking of signing a contract with an agent for the 3 percent, because you will likely not get anyone crazy enough to train you for the 1.5 percent, unless they are one of bank roll agents. Don’t hire a guy that is just giving you money, it usually never works out.

The next biggest question I get from players is how do I know the agent is the best for me, I have three guys but they are all similar?

This is a great question. I am asked this question all the time. So I have a little story to tell you.  This is the best way I can describe which agent to pick.  If you and the agents that you are considering all went into a bar together, and a lumberjack entered the bar to pick a fight with YOU the player.  Which one of the agents would get up and start fighting for you right off the rip?  If you have two agents that would get up and start fighting for you and one agent that you think is kind of a square and wouldn’t fight, then he probably won’t fight for you when you are cut either.

Remember this, YOU ARE THE PRODUCT.  If that Lumberjack smashes you, you do not earn that paycheck. If I am an agent, I would rather get in trouble sticking up for you than have my money maker get in trouble.  If he is not willing to fight a battle with someone bigger than him to protect his money, what will he do when it comes to the NFL?

I have another one, remember this.  Some of you have kids or nieces/nephews.  If you were to leave one of those with the agents, which one would you feel the most comfortable with watching your kid for a day?  The reason I give you this analogy is because your entire livelihood as a player could lay in the hands of an agent’s decision. Make sure you trust him enough with something/someone you love before you find out the hard way.

What does an agent do for a player during the Draft Process and leading up to the draft?

This is the final question I am going to answer for this article because it is very amazing.  There are many things an agent does.  An agent is responsible for your contract. An agent is responsible for helping you find a team that fits your mold the best.  If your agent does not know anything about football it could be a problem.  If you are a 3-4 defensive end, why would choose a 4-3 team to be signed to as an undrafted free agent?  You need to think about the repercussions of a bad decision.

An agent also deals with Marketing. Some agents have a marketing manager who deals directly with the player.  Most marketing deals are anywhere from 10 to 20 percent.  Meaning they get 10 to 20 percent of the deal.  That is not a bad deal because this is separate from your original contract.

An agent also is the one that releases any statement for the player if he is in trouble. They help with taxes, they deal with media, they are responsible with getting your name out there. They do many things, like assist with All Star Game Invites, they help you get a better Pro Day, and they are ultimately the middle man between you and the scouts.  You have to trust your agent and that is very important.

We have helped thousands of prospects over the years with this stuff, and we will continue, because a player who does not understand is a potential player without a future.