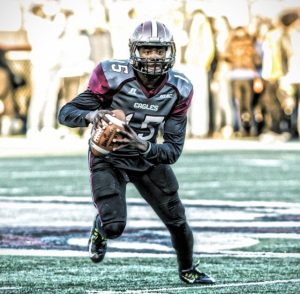 Participating at the Boys & Girls club for a day in Norfolk, VA. I had a lot of fun just socializing and playing around with the kids.

My Dad, he is a great example of a hard working man and I value everything he has taught me through the years.

My ability to make defenders miss in the open field like a skill player and extending plays with my legs.

The best defensive players, coverages and fronts, and tendencies.

Tyrod Taylor, because he is an accurate passer with the ability to be an effective runner. 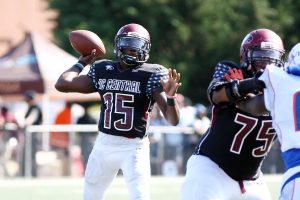 The exposure and not being able to play on TV every week so people can actually witness the good things you do on the field.

Don’t look at my measurements, I’ve always found ways around being a “shorter” quarterback. I am also athletic enough to transition to another position if asked too. Also, never count me out, I’ve always been a great playmaker no matter what school or level of competition I’ve been up against (FBS schools)

I honestly don’t know, haven’t really put much thought into it. Just trying to make it there first.